Zoey Clark was the girlfriend of James Jesse, who is better known as the Trickster.  She works beside him and is known as Prank.  Together they had a son named Axel Walker (Devon Graye), who went on to become the second Trickster.

After her son was put in prison, she orchestrated a plot to break him out.  She originally planned for them to leave Central City, but Axel was determined to make his father proud of him.

Realizing how determined her son was, Zoey stopped taking her medication and again took up the role of Prank to help him.  The pair set in motion a plan to capture and kill the Elongated Man (Hartley Sawyer).

In a video broadcast, Prank and Axel announce that they plan hold a game show.  They have hostages and an acid shower, and plan to exchange for the "Stretching Man".  Cisco and Killer Frost (Danielle Panabaker) show up where they attempt to free the hostages.  However, they are surprised when the hostages are revealed to be Prank and Axel.  The two quickly strap meta-human dampeners on the two, rendering their powers useless.

Before they can decide how to kill them, Ralph arrives and although Prank orders Axel to kill him, he is swiftly defeated.  After seeing her son fall, Prank activates the acid shower to at least kill Cisco and Caitlin.  However, Ralph stretches over them to shield them from the acid.  After the two are saved, Prank and Axel are taken by the police. 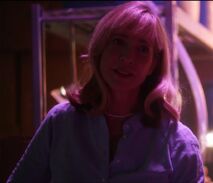 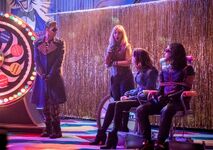 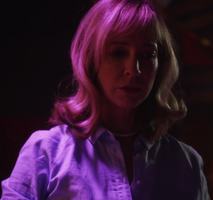 Add a photo to this gallery
Retrieved from "https://femalevillains.fandom.com/wiki/Zoey_Clark_(Arrow)?oldid=184006"
Community content is available under CC-BY-SA unless otherwise noted.