The Female Villains Wiki
Register
Don't have an account?
Sign In
in: 2000s, Attempted Murder, Blonde,
and 15 more

Zoe Heinrich (Without a Trace)

Zoe Heinrich (Jessa French) was the main villainess from "Snatch Back," episode 1.07 of Without a Trace (airdate November 7, 2002).

Zoe's backstory revealed that she was once pregnant with her boyfriend's baby, only to suffer a miscarriage. She went through a deep depression over the loss of her baby, but despite this, she became a surrogate mother to Maureen and Jeffrey Stephens, resulting in the birth of their daughter, Jessie, on October 19, 1999. After delivering their baby, however, Zoe felt that she committed a sin by giving up her baby to the couple, adding that she hoped that God can forgive her.

Whether it was due to her religious beliefs or to make up for losing her own baby, Zoe turned heel by planning to abduct Jessie. She spent an immense amount of time stalking the couple and their daughter waiting for the right time, which came in the beginning of the episode when she spotted Jessie at a nearby park next to Abby Buckman--the daughter of attorney Angela Buckman. However, due to the girls looking similar and feeling her window of opportunity closing, the villainess abducted Abby instead of Jessie.

Due to Angela's tenacious personality while working, it was suspected that the kidnapper was connected to someone she put away. After learning that Angela's husband, Matthew Anderson, had an affair, his mistress, Clarissa Walters, was suspected, but she passed a polygraph. Samantha Spade and Jack Malone noticed the similarities between Abby and Jessie and realized that the abduction was a case of mistaken identity, leading them to look into Jessie's birth. Malone interviewed the Stephens, who revealed Zoe as their surrogate. A visit to Zoe's home had her boyfriend revealing their past, while also uncovering that Zoe took her lover's gun as part of the abduction plan.

The episode's climax had Malone and the rest of the group at Zoe's trailer, with Martin Fitzgerald talking to Zoe under the guise of needing help with his vehicle. Upon seeing the FBI outside, however, the evil Zoe sealed herself in and threatened to harm and even kill Abby, leading to Malone enlisting Vivian Johnson to attempt to reason with Zoe. The deranged villainess picked up the gun and continued her threat to harm Abby, while adding that she was taking care of her, with Vivian continuing to plead with Zoe to return Abby to Angela and Matthew. Zoe later returned Abby to her parents, but after doing so, she committed suicide by shooting herself in her chest. 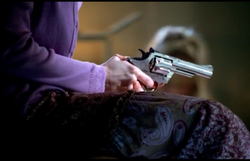 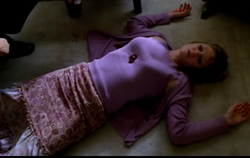 Zoe following her suicide
Community content is available under CC-BY-SA unless otherwise noted.