Zikra Wriz is the villainous protagonist of the 1990 Italian sci-fi horror comic "Storie Blu #121: Lo Scambio" (The Exchange). She was created by Pier Carlo Macchi (artist) and Carmelo Gozzo (writer).

A master thief, Zikra makes her first appearance in the story robbing a home on a planet called Denxyor. Once she successfully cracks the safe, she not only finds the federal credits that she was expecting (approximately 100,000 in number), but also a strange device. Realizing that it must have some sort of value to be housed inside of there, she swipes it along with the money. Unfortunately for her, the homeowner wakes up immediately after, forcing Zikra tobludgeon him to death with a nearby object.

Zikra manages to make it back to her ship safely, but when she turns on the news, she is horrified to discover that the man she robbed was actually a great scientist named Hor Urhion who had ties to another man named Gax Odqox - the boss of the planet's criminal underworld. To make matters worse, she was also caught on "synograph" while fleeing the home with the loot. Knowing that she can't let Gax's goons find her, Zikra blasts off into space and continues on until she spots a planet deemed safe for her to lay-low, Earth.

The villainess kills a couple who happen to be driving by with her disintegrator gun and steals the clothes from the female. After finding her way to a hotel to catch her breath, she takes the opportunity to read the instructions for the device, which also happened to have been in the safe. Zikra learns that it is an invention which allows two individuals to completely switch bodies. Elated, she realizes that the device is the perfect solution for permanently cleansing herself from Gax's radar and immediately begins looking for a youthful female earthling whose anatomy she can steal.

The alien finds just that in a young woman named Gwen Foster, who lives in Memphis, Tennessee. Using a ruse to enter the woman's apartment, Zikra knocks out Gwen and then uses the device to successfully exchange bodies with her. Knowing that she cannot simply take over as another existing person with complete ignorance, the villainess uses the stolen invention again to read her captive's memories, starting with the most recent ones. To her to unwelcome shock, she sees Gwen masturbating while thinking about a man named Myron and learns that she has actually agreed to meet him at his apartment within the hour. Assuming him to be the woman's lover, Zikra determines that it would probably be best not to cancel and rather just go and get it over with so that she can return to the apartment and begin planning her next moves.

Zikra arrives at Myron's place after making sure to equip her electronic automatic translator, which allows her to both speak and understand English. She deduces that the quickest way to get this meeting over with would be to give him what all men ultimately want deep down. Thus, she immediately suggests sex and begins forcing herself on him lasciviously. Unbeknownst to her, however, Myron is quite shocked and confused by this behavior, as Gwen is not his lover, but in fact, his sister. He comes to his own deduction that this woman must not be the real Gwen, and has done something with his sibling so that she can steal her identity. Myron plays along for a little bit, just to be extra certain. He "reminds" the woman of how much she loves anal sex, and even drinking his urine afterwards; both acts which Zirka reluctantly allows.

With clear proof that this is not his sister, a furious Myron begins to beat her while demanding that she explain just who she is, as well as her scheme. Unfortunately for Zikra, one of the blows connects with her translation device and destroys it, leaving her with only her native alien language. While trying to piece together what has happened, she realizes that Gwen must have had sexual feelings for her brother that neither he nor anyone else ever knew about. Thinking that the strange language is just her attempt to mock him, Myron continues his violent assault, using his fists, a knife and other objects, until Zikra is deceased. In a tragic twist, the innocent Gwen meets an even worse fatal conclusion when Gax's goons locate her in Zikra's body and take her back to their ship. 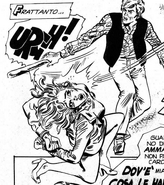 Retrieved from "https://femalevillains.fandom.com/wiki/Zikra_Wriz_(Storie_Blu)?oldid=209473"
Community content is available under CC-BY-SA unless otherwise noted.