Zeke's Wife (real name unknown) was a model and wife of a mercenary acquaintance of Deadpool named Zeke. She underwent a procedure by an evil doctor that allowed her to retain her vitality as long as she ate human flesh. She appeared in Marvel’s Deadpool vol. 2 (2008) #4-5. Art by Carlo Barberi.

Zeke was a mercenary acquaintance who contacted Deadpool to rescue his wife. Zeke's wife (a model) had gone to a doctor named Druek Lovonso who invented a treatment which allowed his patients to retain their beauty and vitality forever. The secret catch was they needed to eat human flesh or become zombie like. His wife had the procedure, but Zeke was unable to pay, so she stayed with Dr. Lovosno as collateral. Unknown to Deadpool, Zeke proposed Dr. Lovosno a trade – in exchange for luring Deadpool to Dr. Lovosno’s castle Zeke could get his wife back and cure her. Lovosno would use Deadpool’s regenerative body as self-replenishing food source for his patients.

Deadpool was captured and placed in a dungeon pillory by Dr. Lovosno. Deadpool awakened to find Zeke’s wife removing his clothes, taunting him. Deadpool offers to save her but she proceeds to explain she was willingly staying with her lover Dr. Lovosno and didn’t want to be cured. She planned to kill her husband Zeke and then feed on Deadpool forever to remain young.

Deadpool's body turned out to be an undigestible meal for the patients. To save himself, Deadpool offered to lure Zeke and his men to his castle so they could be food instead. Deadpool brought Zeek’s wife bound and gagged (so she wound not try to eat him) to rendezvous with Zeke. She thought she was in on the plan, but Deadpool was really using her as a disposable bargaining chip to make sure he got paid. Zeke brought an army of locked and loaded mercenaries, demanding the return of his wife. Deadpool held the wife in front of him, planning to use her undead body as a human shield.  Zeke and his mercenaries were suddenly ambushed by the Dr. Lovosno and his zombified patients. As his men were being devoured, Zeke pleaded to his wife to save him. She ignored his pleas with a cruel smile as Dr. Lovosno joined her saying ‘save him for dessert’. They were laughing at Zeke’s predicament as Deadpool set off hidden explosives in the castle. Zeke’s wife was blown up and killed, along with everyone else. 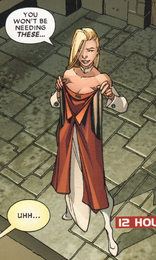 Disrobing Deadpool to prepare him as a meal 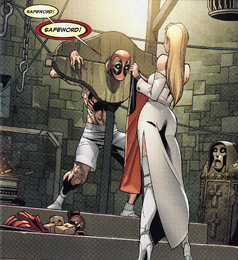 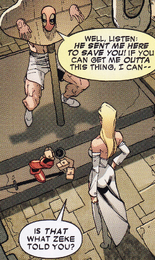 Taunts Deadpool as he offers to save her

Lording over her captive

The arrangement to Dr. Lovosno 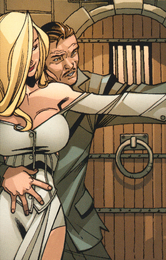 Caressed by her lover Dr. Lovosno

Backed by zombie nurses ready for a meal

Returning Wife to Zeke in a trade

Bound and gagged about to be traded

She is a bargaining chip

Wife is a human shield as gunfight is about to start 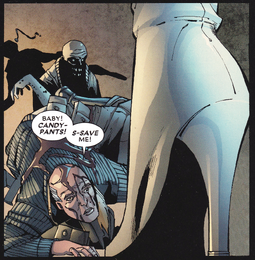 Zeke pleads to his wife to save him 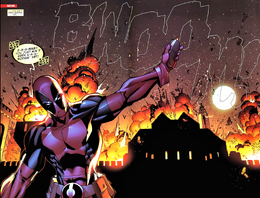 Deadpool blows up the castle with Zeke's wife in it. 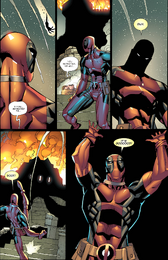 Deadpool kicks wife's disembodied, still living head back into fire (re-imagining)
Add a photo to this gallery
Retrieved from "https://femalevillains.fandom.com/wiki/Zeke%27s_Wife_(Deadpool)?oldid=214944"
Community content is available under CC-BY-SA unless otherwise noted.