Jo-Jo The Congo King rescued a beautiful blonde girl from the clutches of a gorilla.  He finds out that she is Memsahib, or Missy Locke, who is out looking to find the Great Pearl known as the Talisman Pearl in Mountain Lake.  That night, Miss Locke tells Jo-Jo that her grandfather had explored this country years ago and left her a map.

A sinister man named Renegade reported back to Queen Zazula to tell her of Miss Locke, and that she is teaming up with Jo-Jo.  Therefore, she gathered up her men to greet her trespassers.

Zazula acts like a friend at first.  However, she speaks in private with Jo-Jo, telling him that she plans to allow her to take the white stones from the lake.  Then she will kill her and her men, and escape the wrath of the Lake Spirit, which has prevented herself from obtaining the pearls herself.  Jo-Jo refuses aiding such a plan, which angers Zazula.

Back at Zazula's lair, she meets with the Renegade, who proposes to split the profits after they take out Jo-Jo and the girl.

Locke's diver is killed by a freshwater shark, and she employs Jo-Jo to take over, since she didn't come all this way to fail.  While he is underwater, Zazula and her men attack.  The Renegade abducts Miss Locke.  Unaware of the commotion going on, Jo-Jo is attacked and successfully kills a giant octopuss.

When Jo-Jo appeared at the surface of the water, Zazula's men were frightened, thinking he was the Lake God.  They thought that Zazula had defied the god, and now it was exacting revenge.  In the commotion, Jo-Jo rescued Miss Locke.  As they were walking away, one of the natives impaled Zazula through the chest with his spear.

Jo-Jo had successfully obtained the Talisman Pearl, and presented it to Miss Locke. 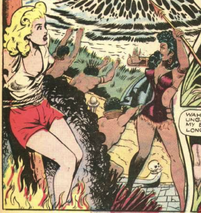 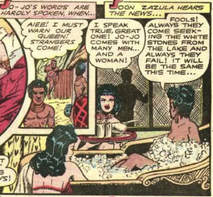 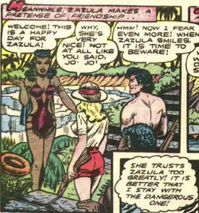 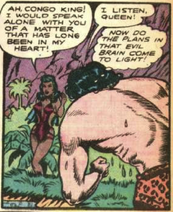 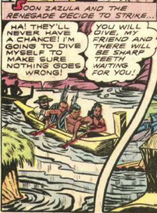 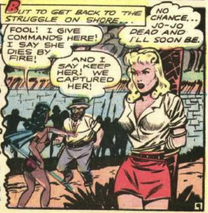 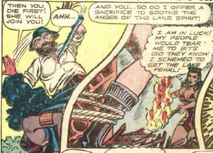 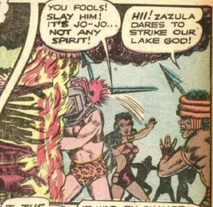 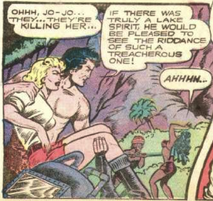 Add a photo to this gallery
Retrieved from "https://femalevillains.fandom.com/wiki/Zazula_(Jo-Jo_Comics)?oldid=155704"
Community content is available under CC-BY-SA unless otherwise noted.