Zara and Cora are the two villainesses in Jungle Raiders, a 1945 Columbia serial that appeared in 15 chapters.  Cora Bell (Veda Ann Borg) was the hidden villainess who teamed up with Zara (Carol Hughes), the High Priestess of the god Rama.

The first indication that this is another cheap-o cliffhanger serial of the era is that there is NO jungle to be seen... just the rocky, desert boulder sets used many times before.

A young woman searches for her scientist father (who was researching a miracle drug used by the natives) in a mysterious land controlled by the tribe of Arzecs (not a typo). Enemies of the heroes include Zara, the High Priestess of the god Rama, and the greedy blonde Cora Bell who cares nothing about the miracle drug, but must get her hands on the cache of rare jewels thought to be held by the native tribe.

Cora and Zara come to a truce and secretly conspire to aid each other for their own benefit. Of course, each intends to double-cross the other, which finally comes out, and the two literally go for each other's throat in a rousing, legs-entwined catfight. The two roll off a precipice, landing on a bed of sharp spikes below (landing unseen), locked together in a mutual demise. 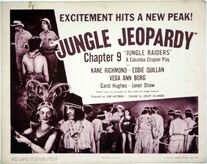 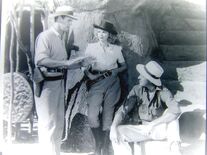 Veda Ann Borg prances around in riding pants and boots! 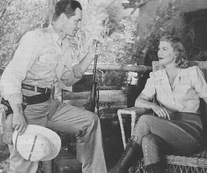 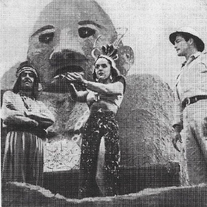 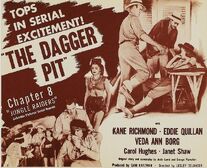 The chapter title is a hint about the climax. 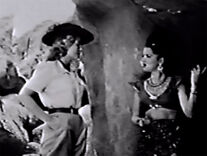 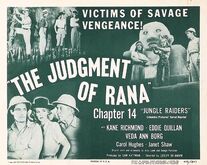 Note the bed of spikes at top left. 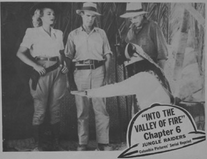 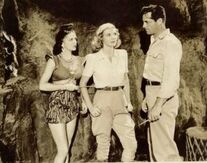 Zara and Cora shortly before their fatal catfight. 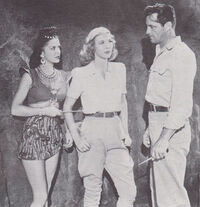 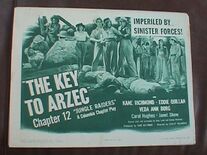 Add a photo to this gallery
Retrieved from "https://femalevillains.fandom.com/wiki/Zara_and_Cora_(Jungle_Raiders)?oldid=102019"
Community content is available under CC-BY-SA unless otherwise noted.