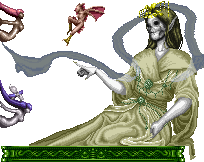 The female bosses and regular enemies encountered in the 1993 Super Nintendo action game "Run Saber" are listed below.

The boss of the second stage. She was originally a female woman in the game's early development, but was changed to a living corpse before release.

One of the mid-bosses of the first stage. Come in two color varieties.

Retrieved from "https://femalevillains.fandom.com/wiki/Zako_and_Monsters_(Run_Saber)?oldid=100920"
Community content is available under CC-BY-SA unless otherwise noted.