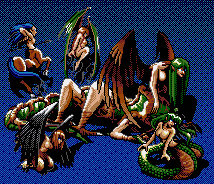 Listed below, are the female enemies encountered in "Legend of Shalice" (レジェンド オブ シャリス), a fantasy RPG developed for the PC98 in 1993 by developer Maxima.

Nor is a demon and servant to the game's main antagonist, Erbek (エルベク). She is one of the three demon generals, along with the blue demon Week and the male humanoid demon Hass.

Early on in the adventure, main protagonist Ozro and his adopted son Sail journey to the village of the river people in order to find out why the water has been polluted. Upon arrived, the two are horrified to discover that every resident of the village has been brutally slaughtered and the area now overrun with demons. When they try to leave, they are stopped by Nor, who says that she intends to spill their blood for Erbek's resurrection. A battle ensues, with Ozro managing to sever Nor's right arm in the process. Nor is bewildered that a human could successfully do such a thing to a demon like her, giving opportunity for the heroes to make their escape.

Later on, in Chapter 2 (aka. "Disk C" of the game), Nor has makes a deal with the king of Crowden that all children up to age 10 be turned over to the demons in exchange for the castle and city's protection. The reason for these terms is that three guardians capable of defeating Erbek had been born as human children ten years prior, and the demons wish to kill them before their full power is awakened.

Sometime later, the heroes rescue a girl named Neen - who is rumored to be one of the guardians - from Burke Tower, where she had been imprisoned by the demons. When Nor learns of this, she immediately attacks Crowden Castle and confronts the king over his broken promise. The hero party steps in and defeats Nor in battle a second time, though this time Ozra becomes mortally wounded by the demon. To help cure him the party travels to a secret meadow where a flower with powerful curative abilities grows. Once they arrive, however, Nor appears and crushes the flower. She is then battled a third time and is killed.

Towards the end of the game, the heroes spy on a nearby demon village and learn that if Erbek is revived, his generals will be revived with him. Sure enough, in the final dungeon, Week, Hass, and Nor appear and attempt to stop the heroes one final time. Nor is defeated for good once the party eliminates Erbek.

Her right arm is severed (oddly, this is henceforth reflected in her overworld sprite, but not her battle sprite).

Final showdown.
Add a photo to this gallery

A-Sphinges are regular enemies encountered on the overworld on Disc F.

Centaurs are regular enemies encountered on the overworld on Disc C.

Harpies are regular enemies encountered on the overworld on Disc C.

Lamias are regular enemies encountered on the overworld on Disc C.

Medusas are regular enemies encountered inside of the cave to the village of the River People on Disc F.

Succubi are regular enemies encountered inside of Pell cave on Disc C.

Retrieved from "https://femalevillains.fandom.com/wiki/Zako_and_Monsters_(Legend_of_Shalice)?oldid=131933"
Community content is available under CC-BY-SA unless otherwise noted.