Start a Wiki
watch 01:51
The Loop (TV)
Do you like this video?
Yuyami (夕闇) is the primary antagonist of the 2013 visual novel "Onmyou Kishi Towako -Hebi Kami no Inma Choukyou-" (陰陽騎士トワコ～蛇神の淫魔調教～).

Yuyami is a rouge diviner who runs a brothel where girls are kidnapped and then broken down into sexual submission, thanks to the help of several incubi which she has brefriended.

Yuyami kills anyone who gets in her way, including the best friend of the game's protagonist - Towako Yagyu. Years before this, when she was a terrorist, she also murdered both of Towako's parents while hijacking a plane; an act which she deeply gloats about.

Through the help of her friends, Towako is finally able to break free from this hell and battles her arch enemy one last time. Using all of her power, Towako deals a blow to Yumami, causing the villainess to burst into a thousand pieces.

At the end of the game, it is revealed that Jormungand was not serving Yuyami, but in fact, the other way around; adding that the evil woman forged a pact with the demons in exchange for immortality. 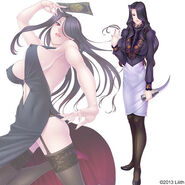 Yuyami and Jormungand vs. Towako and Vanguard

Add a photo to this gallery
Retrieved from "https://femalevillains.fandom.com/wiki/Yuyami_(Onmyou_Kishi_Towako)?oldid=160783"
Community content is available under CC-BY-SA unless otherwise noted.