Ying Ma (Françoise Yip) is the hidden villainess of "Paying for It", episode 1.08 of UPtv's Ties That Bind (airdate September 30, 2015). She was a Chinese citizen who taught an English class in Crestview, with many of her pupils being illegal immigrants. One of her students was John Chow, a man who had paid smugglers to sneak his girlfriend Mei-Mei into the United States, only for the men to hold Mei-Mei hostage to extort money from him.

After being seen by Matt McLean being beaten up by the smugglers at the construction site Matt worked for, he convinced John to let his wife, detective Allison McLean, help him retrieve Mei-Mei from her abductors. During the process, Allison and Devin Stewart questioned Ying, who expressed ignorance of any potential human smugglers in her class and pointed the detectives in the direction of her former student Shan, who she said confessed to her about his criminal record in China. When her classroom was later found vandalized with a graffiti message saying not to talk to the police, Ying blasted the detectives to talking to Shan and proclaimed she couldn't help them anymore, claiming it was to protect her students and assure them they were safe.

But as revealed in the episode's climax, Ying was the head of the smuggling ring and had been behind Mei-Mei's kidnapping, planning to sell her into slavery if John was unable to pay the $5,000 ransom they had arranged. Ying's villainous reveal came when John met with them to give Mei-Mei's kidnappers $2,000 he'd stolen from work, expressing shock at Ying's involvement in the smuggling ring. After callously telling John that her actions were "just business", John attempted to give Ying the money to release Mei-Mei, only for Ying to refuse the money for it not fulfilling their arrangement. Despite John's pleas for her to take him and let Mei-Mei go, the evil Ying instead ordered her henchmen to take the money and kill John, rejecting John's pleas for Mei-Mei's freedom by chiding John for talking to the police.

But before her henchman could go through with the order, Allison and Devin (having figured out Ying's involvement in the ring due to how much information she would know about her students via her classes) arrived, getting into a shootout with Ying's henchmen. When John got Mei-Mei from Ying's truck and the two ran away, Ying tried to get one of her men to stop them, only for him to be shot as he turned to fire at them. As her remaining henchmen surrendered, Ying fled from the scene, being chased to a nearby junkyard by Allison. As Allison pursued her and blasted Ying for caring more about money than the people who trusted her for help, Ying proclaimed that having money and power was the "American dream" and that she was giving the girls she sold into slavery the opportunity to have that. Ying then opened fire on Allison with her pistol, only for her to evade Ying and jump on top of her from a truck, handcuffing her before she was later taken into custody along with her cohorts. 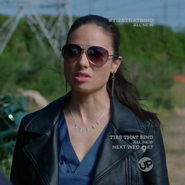 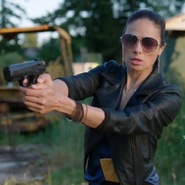 Ying armed with a pistol
Add a photo to this gallery
Retrieved from "https://femalevillains.fandom.com/wiki/Ying_Ma_(Ties_That_Bind)?oldid=103089"
Community content is available under CC-BY-SA unless otherwise noted.