She is a car dealer who owns a showroom full of classic cars which she steals to sell on to wealthy clients. She is also the boss of an older man dressed like a butler who assists her with her crimes.

The police are investigating the thefts and decide to use a classic car owned by one of their designers, Toudou, as bait. Sure enough his car is taken along with him inside, to Yasuko's showroom

She takes Toudou as a hostage and tells the police he shall be released when a list of cars are delivered to her.

Inside the showroom Toudou shows his obvious love of classic cars by not approving of the unusable state of the cars in the showroom. Yasuko shoots one of the cars with a pistol to prove a point that she only wants them for show, much to Toudou's distress.

She then attempts to shoot the classic car owned by Toudou to render it unsuable. Toudou begs her not to as the butler holds him back, he then breaks free and stands in front of her line of fire due to his love for the car. Yasuko doesn't seem to care and tells him she's going to leave him with something nasty to remember. Just as she's about to shoot him the Brave Police robots show up in time and save him.

Her butler pulls up in a truck to help her, Yasuko gets inside and orders the butler to turn the Brave Police into scrap. A shootout comences between both sides and ultimately the Brave Police end up winning. Yasuko and her butler are then both arrested for grand theft auto. 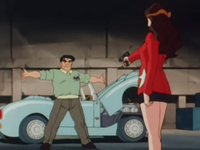 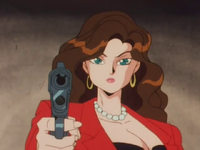 Yasuko holds a gun to Toudou 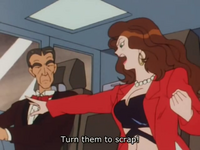 Ordering her subordinate to turn the Brave Police into scrap 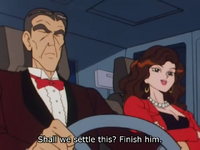 Feeling in control, she gives the order to finish the police 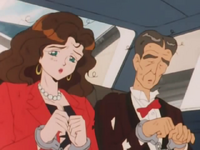 Arrested for her crimes
Add a photo to this gallery
Retrieved from "https://femalevillains.fandom.com/wiki/Yasuko_Ensuuji_(Brave_Police_J-Decker)?oldid=64557"
Community content is available under CC-BY-SA unless otherwise noted.