Start a Wiki
watch 01:51
The Loop (TV)
Do you like this video?
Yark, Byunt and Maik, aka. "The Cave Stupids" are the primary antagonists of "Skadi and the Cave Stupids", a story arc within the long-running comedy adventure webcomic "Skadi" by Katie Rice and Luke Cormican.

The villainous trio use their music to hypnotize people so that they may then sacrifice them to a gigantic creature. They manage to ensnare Skadi into this trap, but some quick thinking from her partner/slave Diseasoid ensures that his ears stay plugged. Skadi is dropped into the huge pit, but an angry kick from Diseasoid causes Miak to fall right after her. The remaining three individuals then engage in a music showdown as both the hypnotized Skadi and Miak pummel each other on the long tongue of the beast.

Finding himself losing, Diseasoid ultimately chooses to just knock Yark and Byunt into the pit as well. Skadi is saved and the creature is killed, taking all three of the "Cave Stupids" along with him. In Hell, however, Yark, Byunt and Miak find themselves turned into succubi by the very succubus that Skadi had tangled with earlier in the series. Their final appearance is a brief cameo in the "Promises" story arc, where they attempt to escape through the new magical third eye of frenemy character Boudica. 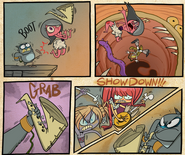 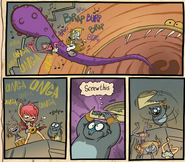 Final appearance.
Add a photo to this gallery
Retrieved from "https://femalevillains.fandom.com/wiki/Yark,_Byunt_and_Miak_(Skadi)?oldid=87551"
Community content is available under CC-BY-SA unless otherwise noted.