Start a Wiki
watch 01:48
The Loop (TV)
Do you like this video?
Xia Min (Benita Ha) is a minor villainess who appeared briefly in TV series 'The Net' during episode 'Pandora's Box'. She is a member of the elite terrorist organization 'The Praetorians' a group of high class, powerful criminals who eventually want to control the planet. Xia Min appears during a meeting at the Praetorians hidden HQ where the members sitting at the table are announcing their plots of illegal activity to gain power and money, each hoping to get the go ahead from the main leader. 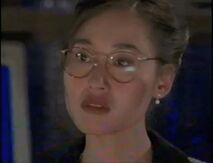 Add a photo to this gallery
Retrieved from "https://femalevillains.fandom.com/wiki/Xia_Min_(The_Net)?oldid=198665"
Community content is available under CC-BY-SA unless otherwise noted.