Start a Wiki
watch 01:51
The Loop (TV)
Do you like this video?
Wicked Witch of the West (Margaret Hamilton) was the main antagonist in the 1939 film "The Wizard of Oz".

The Wicked Witch of the West was a green-skinned witch dressed in a long black dress with a black pointed hat.  This representation of the Wicked Witch has become a standard for what witches resemble and an archetype of human wickedness.

She was the sister of the Wicked Witch of the East, who Dorothy's house landed on top of.  Because of this, she demands the Munchkins reveal who killed her sister, not long after Dorothy's arrival in Oz.

The Wicked Witch sought revenge against Dorothy (Judy Garland), even though it was an accident.  However, as soon as the Witch is reminded of the ruby slippers, all interest in her sister's death vanishes and all she cares about are obtaining "her" slippers, which will enable her to conquer Oz.

Before Dorothy and her friends get to the city, the Witch casts a sleeping spell over a field of poppies through which the group must pass.  Glinda the Good Witch of the North (Billie Burke) remotely counteracts the spell with a snowfall.

The Wicked Witch then flies on her broom over the Emerald City, demanding that the citizens of the Ermerald City surrender Dorothy to her, and the Wizard demands the destruction of the Witch, with her broom as proof, in exchange for granting the wishes of Dorothy and her companions.

Dorothy and her companions, the Scarecrow (Ray Bolger), the Tin Man (Jack Haley), and the Cowardly Lion (Bert Lahr) were sent to kill the Witch and bring back her broomstick for proof.  The Witch then sent the Winged Monkeys as the first wave of attack.

Dorothy was kidnapped by the Witch, and then rescued by her companions.  Dorothy throws a bucket of water on her, in an attempt to put out a fire the witch bestowed on the Scarecrow.  As a result, the Witch started melting until there was nothing left except for her black gown and hat.

Margaret Hamilton's other role in the film is the Witch's Kansas sepia tone sequence character, Miss Almira Gulch, who is the town Mayor.  She arrives on her bicycle at the farm and tries to put Dorothy's pet dog Toto down for attacking her when Dorothy and Toto were walking home from the school house.  Almira says to Uncle Henry (Charley Grapewin), "Mr. Gale! I'd like to speak with you and your wife right away".  Auntie Em (Clara Blandick) tells her off, saying to her, "Almira Gulch, just because you own half the country doesn't mean that you have the power to run the rest of us.  For 23 years I've been dying to tell you what I thought of you!  And now...well, being a Christian woman, I can't say it!"  Dorothy in her dream sequence on the way to Oz sees her again outside the window in the tornado.  At that moment, Miss Gulch transforms into the Wicked Witch of the West, flying on a broom.

I'll get you my pretty and your little dog too.

AFI ranked her as the 4th greatest movie villain on the countdown (behind Dr. Hannibal Lecter, Norman Bates and Darth Vader), but she's the highest ranking villain on the list to be female. 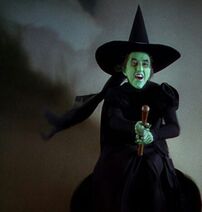 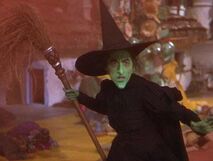 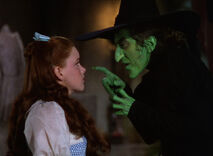 Add a photo to this gallery
Retrieved from "https://femalevillains.fandom.com/wiki/Wicked_Witch_of_the_West_(The_Wizard_of_Oz)?oldid=184058"
Community content is available under CC-BY-SA unless otherwise noted.