Start a Wiki
watch 01:48
The Loop (TV)
Do you like this video?
Whitney Manning (Kaitlyn Bernard) is the main villainess from the 2019 Lifetime film, Homekilling Queen (airdate May 11, 2019). She is the daughter of Connie and Rob Manning.

Whitney is also the main "queen bee" of her high school, though the film's beginning revealed the true depths of her malevolent personality. A flashback revealed that she killed fellow student Abbie Kirk a year prior, as Abbie was an obstacle in her quest to become homecoming queen. Whitney was in the running for queen in the film's events, and her campaign began with Connie buying lucrative gifts for the schools staff, which included Principal Wainsley, who Connie was having an affair with.

Upon learning about Natasha Hart (the main protagonist) being one of the candidates running against her, Whitney decided to sabotage Natasha, first by catfishing Natasha and posing as student Garrett Riley, after which she sent a photoshopped nude photo of Natasha in an attempt to make Natasha look promiscuous and set up Garrett as the person who posted the photo. Both parties--with the help of Natasha's mother, Sarah Hart--figured out that Whitney was the culprit, though Wainsley's investigation was halted when he was blackmailed by Connie, who threatened to tell his wife about their affair if he didn't drop the investigation.

Even so, Natasha remained a primary threat to Whitney's goals, and it was under the indirect advice of Whitney's grandmother, Evelyn Whitland (who had been controlling both Connie and Whitney throughout their lives), that she decided to further set up Natasha as a drug addict--knowing that Natasha has a past drug history. The villainess went to drug dealer Jason Montrose and offered to pay $1000 for a batch of Oxycontin, though Jason later demanded $5000 due to Whitney's wealth. Angered over being shaken down, Whitney plotted to kill Jason, beginning with adding fentanyl to her purchase. During their meeting, Whitney took the fentanyl and followed Jason's instructions on how to administer the drug, with Jason noting that Whitney was taking too much of the drug. Afterwards, the evil Whitney injected the lethal dose into Jason, who struggled with Whitney before fatally succumbing to the drug.

After killing Jason, Whitney "borrowed" a car belonging to family housekeeper Susan Lewis, and drove towards Natasha's car, where she planted the drugs. She later phoned police regarding Natasha driving under the influence, leading to Natasha being taken in. Her plan was set to result in Natasha being disqualified from the competition, and afterwards, Whitney was boasting about her actions towards Natasha to her friend, Kelsey Stevens, who (having been Natasha's friend in the past) expressed shock over what Whitney had done, only for Whitney to state that Natasha "had it coming."

Along with Garrett, Belle Larson, and Kelsey (who grew tired of Whitney's personality), Natasha took Whitney's lip gloss and turned it over to Detective Matteo, and the film's climax saw Natasha crash a gathering at the Manning home and reveal that the gloss matched the sample from Jason's murder scene, and that the police were on their way. Realizing her crimes have been exposed and she is about to be arrested, the deranged Whitney went into a panic and repeated the words that her evil grandmother told her, which led to the murder and planting the drugs, and it was at that moment that Matteo informed Whitney that she was under arrest for Jason's murder, causing her to break down completely as she is handcuffed and taken away. As revealed in the film's epilogue, Whitney was bailed out by Connie, but was confined to house arrest. 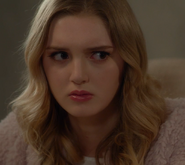 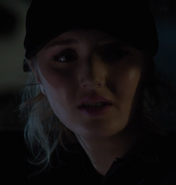 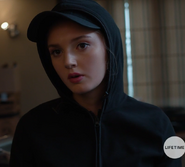 Add a photo to this gallery
Retrieved from "https://femalevillains.fandom.com/wiki/Whitney_Manning_(Homekilling_Queen)?oldid=172764"
Community content is available under CC-BY-SA unless otherwise noted.