Start a Wiki
watch 01:48
The Loop (TV)
Do you like this video?
White Dragon, aka. Dina, is a minor antagonist in the webcomic "Death P☆rn" by El Cid.

White Dragon is a henchwoman to a dangerous criminal named "Toad". She travels with him as he attempts to have made a staged terrorist beheading video for the city's corrupt mayor. Standing guard outside of the building, she is eventually encountered by Shannon, one of the protagonists. White Dragon's true lack of skills become apparent and she is easily overpowered. The henchwoman even begs for her life, claiming that she's actually just a dance instructor who purchased some cheap armor on eBay. Regardless, Shannon slits her throat and snaps her neck. She later decapitates White Dragon, stuffs a live grenade into her mouth and launches it into the building where the remaining criminals are. 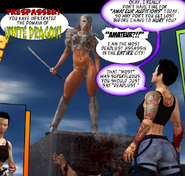 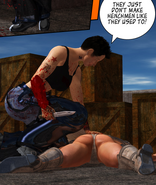 Add a photo to this gallery
Retrieved from "https://femalevillains.fandom.com/wiki/White_Dragon_(Death_P%E2%98%86rn)?oldid=136279"
Community content is available under CC-BY-SA unless otherwise noted.