The Female Villains Wiki
Register
Don't have an account?
Sign In
Advertisement
in: 1940s, A Taste Of Her Own Medicine, Accidental Demise,
and 19 more

The Whip Woman is an unnamed villainess from Rulah, Jungle Goddess #17. She appears in the 1949 story Terror's Trail.

She is a passenger on a jungle tour boat along with a lot of other wealthy passengers. Along with a man named Plowden she plans to kidnap the passengers and get ransom for their return.

She uses the jungle natives to cause a distraction so that the boat passengers can be rounded up and kidnapped, Rulah is angry at the natives and asks what they are doing, one native tells her about the woman's plans, but the woman appears from behind and knocks Rulah out by hitting her over the head with a pistol.

With Rulah knocked out, the passengers are rounded up and tied to trees in the jungle, the boat captain is told by Plowden to return back to get ransom for the passengers or else they will die by tomorrow night.

While waiting for the boat captain to return with the ransom, the evil woman enjoys herself by torturing the passengers with her whip. She tells them that if the ransom doesn't arrive in time then she will have fun killing them. Rulah then appears, having awoken from her knock out blow, the woman goes to whip Rulah but catches it around a tree branch and also around her neck, resulting in her accidentally hanging herself from the tree. Rulah comments "That is the greatest example of jungle justice I've ever witnessed!"

The woman plans to take a walk 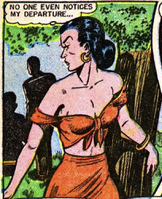 She sneaks away from the group 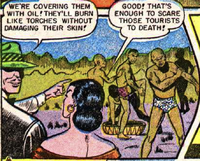 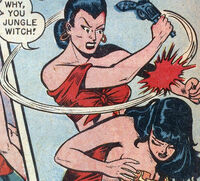 The woman knocks out Rulah with her pistol 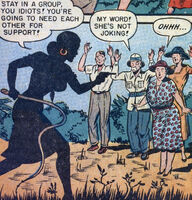 The woman holds the passengers at gun point 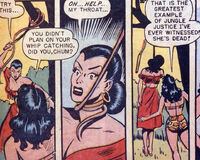 The woman accidentally hangs herself from a tree using her own whip
Community content is available under CC-BY-SA unless otherwise noted.
Advertisement