Wera Vann is the main antagonist in the 2013 episode "The Wedding Crasher" for the TV series "Totally Spies".

Wera Vann, a former wedding dress fashion designer, is responsible for weaponizing wedding dresses from all over the world to destroy wedding celebrations.

Samantha, Clover, and Alexandra are sent by Jerry to investigate. The girls are attacked by Wera's sewing machines and fabric cleaners. They manage to escape and Wera realizes that they are headed to the royal wedding in England and that is where she takes on her next target.

At the royal wedding she disguises herself as a guard to get rid of the spies who she notices are undercover. Alexandra removes her hat and uncovers her true identity. They realize that she is the one weaponizing dresses. Wera lets the girls crash in the river so that she can continue her plan. However the girls escape and angrily pursue her. When the ceremony is about to start she activates the weaponized wedding dress. The bride's dress starts spinning like a tornado and it begins to destroy the ceremony forcing the guests to flee. The girls arrive and manage to stop the dress by attacking the bride with the wedding cake.

Angered, Wera then removes her disguise and reveals the pink weaponized dress she is wearing. She then begins to attack the girls with various weapons from her dress including a chain-cloth whip, and flower-shaped shurikens.

She is finally defeated when the girls use the Escape From Trouble Bubble Wand to trap her inside a bubble. She is later sent to the WOOHP containment facility, still trapped inside the bubble. 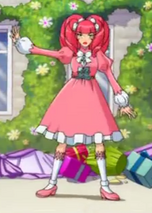 Add a photo to this gallery
Retrieved from "https://femalevillains.fandom.com/wiki/Wera_Vann_(Totally_Spies)?oldid=205044"
Community content is available under CC-BY-SA unless otherwise noted.