Start a Wiki
watch 01:51
The Loop (TV)
Do you like this video?
Wendy (Ruby Rose) was a villainess from episode 1.07 of Dark Matter (airdate July 24, 2015). She is a service android discovered by the Raza crew dismantled in a crate. After building her up and activating her, Wendy quickly warms herself up to the crew by showing off her skills, which include cooking and even sex. Wendy's presence causes some jealousy from The Android, who felt that Wendy isn't what she seems. The Android later apologized to Wendy and stated she was wrong about her, only for Wendy to fire shots at The Android, using One's gun.

It was revealed that Wendy was sent to the crew by Cyrus King, who wanted revenge on the crew. Wendy (using Cyrus' voice) made the revelation herself and later set out on the mission to sabotage the ship and kill the entire crew. The villainess fired shots at Three, leading to one-on-one combat between the two. During the battle, Wendy is stabbed and decapitated by Four, with the decapitation deactivating her. 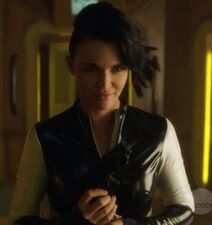 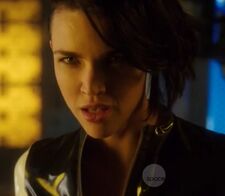 Add a photo to this gallery
Retrieved from "https://femalevillains.fandom.com/wiki/Wendy_(Dark_Matter)?oldid=129845"
Community content is available under CC-BY-SA unless otherwise noted.