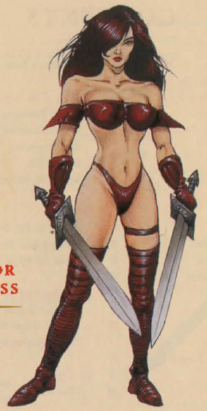 The warrior priestesses are a group of zako/enemies in the 1998 PC/PS video game Deathtrap Dungeon.

Appearing on the "Pit" level of the game, they are scantily-attired Amazon warriors who wield either double swords or sword and throwing knife. Cultists of the demon Agrash, they attempt to obstruct the player's character in his/her quest to delve deeper into the dungeon.

Add a photo to this gallery
Retrieved from "https://femalevillains.fandom.com/wiki/Warrior_Priestesses_(Deathtrap_Dungeon)?oldid=159673"
Community content is available under CC-BY-SA unless otherwise noted.