Wanda Andrews (Corinne Bohrer) is a villainess from "A Christmas Secret," episode 9.09 of Murder, She Wrote (airdate December 13, 1992). She is an employee at Floyd Bigelow's hardware store.

While Floyd was away in Tokyo, Wanda found out that Floyd was embezzling money from charity funds and opening personal accounts in Portland. Instead of reporting the embezzlement, Wanda turned heel by deciding to blackmail Floyd, with her scheme involving recording a cassette meant for her target. The greedy villainess demanded Floyd to meet her in a private location and pay her in exchange for her silence on the embezzlement.

However, there was one problem:  Wanda placed the tape in Charlie McCumber's car by mistake; a mistake due to her color blindness causing her to be unable to distinguish red (Floyd's car) from green (Charlie's car). When Floyd didn't show up to the arranged meeting, the evil Wanda called Floyd directly and made the same threat she made in her cassette. The call was overheard by Floyd's lover, Amy Wainwright, who underwent her own heel turn and shot Wanda to save Floyd. Wanda ended up surviving Amy's attempt, though her complete fate wasn't revealed. 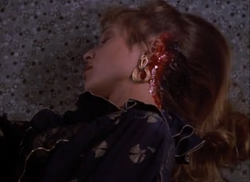 Wanda after being shot by Amy Wainwright
Add a photo to this gallery
Retrieved from "https://femalevillains.fandom.com/wiki/Wanda_Andrews_(Murder,_She_Wrote)?oldid=135684"
Community content is available under CC-BY-SA unless otherwise noted.