Start a Wiki
watch 01:51
The Loop (TV)
Do you like this video?
Wanda is a villainous character from the 1983 story "La Sedia Elettrica" ("The Electric Chair) in the nineteenth issue of the Italian horror comic "Attualita' Gialla".

In her first appearance in the story, Wanda is shown making passionate love to her boyfriend Giulio. Shortly after, she discovers that her previous lover, Ugo - currently incarcerated - has learned of her affair, and subsequently remembers that he will be out in less than a month's time.

The day arrives and Ugo is a free man. He calmly confronts Wanda about what he heard on the inside, prompting her to immediately insist that it was simply a moment of weakness and that she's a one-man woman. Ugo demands proof, and his unfaithful lover is more than happy to comply.

Wanda phones Giulio, falsely stating that it is an emergency. When the unsuspecting man arrives, he finds both his girlfriend and her former boyfriend waiting for him. The two tie him to a home-fashioned electric chair and torture him for hours upon hours. At the end of the day, the devilish duo free Giulio, but only with the accompanied threat that if he does not fork over 10 million dollars to them by the following morning, he will find a permanent seat on their electric chair. However, due to the many severe abrasions caused by the torture, the blackmailed man winds up in the hospital where he then spills the beans of what really happened to him,

The next day, Wanda hears the doorbell. Excited that it is Giulio with the money, she immediately rushes to the door. Upon opening it, however, she instead finds the local police commissioner who then arrests her and Ugo for their crimes. 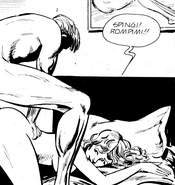 With Giulio, guiltless as one can be...

But when she learns that Ugo has learned of her cheating ways, she knows there's only one thing to do...

Throw him under the bus completely! 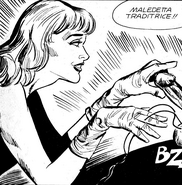 Add a photo to this gallery
Retrieved from "https://femalevillains.fandom.com/wiki/Wanda_(Attualita%27_Gialla)?oldid=165812"
Community content is available under CC-BY-SA unless otherwise noted.