Start a Wiki
watch 01:48
The Loop (TV)
Do you like this video?
Countess Vultura Ravenkrow is the main antagonist in the French comic album "Le Complot des Capes Noires", from French comics series "Adelin et Irina".

In a society entirely ruled by amazons, where men are their slaves, the imperial treasure is stolen, and Princess Irina's sister is accused of this crime.

It soon appears that the real thief is Countess Vultura ravenkrow, a rival noble woman, who rules the small county of Mortrü, with the help of her troop of evil henchwomen, the black cloaks.

Princess irina, having kidnapped Vultura, makes her talk, and then sets an expedition towards Mortrü, but Vultura escapes, and reverts the situation, capturing Irina and her friends.

After several ups and downs, the treasure is recovered, the princess is freed, and Vultura gets killed by an arrow, thus following the fate of several of her henchwomen. 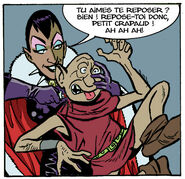 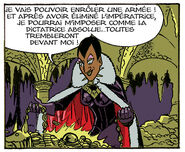 Add a photo to this gallery
Retrieved from "https://femalevillains.fandom.com/wiki/Vultura_Ravenkrow_(Le_Complot_Des_Capes_Noires)?oldid=198663"
Community content is available under CC-BY-SA unless otherwise noted.