Start a Wiki
watch 01:48
The Loop (TV)
Do you like this video?
Vulnavia (Virginia North) is the beautiful-but-silent evil assistant of Dr. Anton Phibes (Vincent Price) in the 1971 British comedy horror film, "The Abominable Dr. Phibes" [he is an expert in theology and music]. She handles a lot of Phibes' day-to-day concerns, and is also his devious accomplice for most of the murders, helping lure his enemies to their death.

In 1921, Dr. Phibes is involved in a car crash that leaves him horribly scarred and unable to speak. At the time, he had been on his way to an operation on his wife Victoria (Caroline Munro). When she does not survive the operation, Dr. Phibes decides that her death was a result of incompetence on the part of the members of her medical team. He devises an elaborate plan to kill those he believes are guilty.

Phibes uses the ten plagues of Egypt as inspiration for his revenge, wearing an amulet with Hebrew letters that correspond to each plague as he conducts the murders. Meanwhile, Inspector Harry Trout (Peter Jeffrey), a detective from Scotland Yard, tries to figure out and arrest whoever is committing the horrible acts.

Vulnavia acts as Dr. Phibes' chauffeur as they arrive at the first doctor's home, where Dr. Dunwoody (Edward Burnham) is torn to shreds by bats that are released from a skylight. At a masquerade party, the second doctor, Dr. Hargreaves (Alex Scott), is killed when his head is crushed inside a mechanical frog's mask as it continues to tighten around his head. The third doctor, Dr. Longstreet (Terry Thomas), is setting up a film strip projector of a belly dancing girl (a sort of 1920s-esque porn) when Vulnavia enters his office. She seductively ties him to his chair and then Phibes enters. Phibes inserts an IV into his veins and drains vial after vial of his blood until he dies, while Vulnavia plays the violin.

After these first three doctors have been killed, Trout discovers that they had all worked under the direction of Dr. Vesalius (Joseph Cotten). From there, he connects them to Victoria's treatment, and identifies four additional doctors and a nurse who were also involved.

Next we see Vulnavia dressed in all black fur with a greyhound dog on a leash, pretending to be a damsel in distress with car trouble. When Dr. Hedgepath (David Hutcheson) rides past her, he directs his chauffeur to stop and help the girl. Dr Phibes kills the chauffeur while Vulnavia inserts a doll into the backseat of the doctor's limo. Then they seal the doors, and Phibes hooks up a device that makes the inside of the car instantly grow frosty cold. The doctor freezes to death at a temperature of under 100 degrees below zero. Phibes celebrates back at his lair while Vulnavia sweeps up the floor and his mechanical band plays, in a 1920s club-like atmosphere.

Trout suspects that Dr. Phibes is still alive and has faked his death. He and Dr. Vesalius visit the Phibes mausoleum at Highgate Cemetery, where they find a box of ashes in his coffin, but Trout decides they are probably the remains of his chauffeur.

The police are unable to prevent Dr Phibes from killing the remaining medical team members, except for Dr. Vesalius himself. Dr. Kitaj (Peter Gilmore) is flying in his WWI plane when he is attacked by rats that Vulnavia and Phibes insert into his cockpit, making him crash into a field and die. Dr. Whitcombe (Maurice Kaufmann) is killed when a giant brass unicorn is launched from a catapult, spearing him in the chest even as Trout and his team are attempting to keep him safe.

The eighth victim, Nurse Allen (Susan Travers), is placed in protective custody inside a room guarded by a policeman at the entrance. Phibes drills a hole in the floor of the room above hers and drips syrup through a tube, coating the sleeping lovely girl with a distillation of Brussels sprouts that attracts a swarm of locusts to fatally gnaw at her until nothing but a skeleton's head covered with hair remains.

For his last plague-based murder, the death of the first-born son, Dr Phibes kidnaps Lem (Sean Bury), the son of Dr. Vesalius, then calls Vesalius and tells him to come alone to his mansion if he wants to save him. When he arrives, Vesalius finds his son under anesthesia and prepped for surgery. Phibes has implanted a small key near the boy's heart that will unlock his restraints. Vesalius must surgically remove the key within six minutes in order to release his son; after six minutes [the same time Victoria was on the operation table], a container full of acid above Lem's head will release its cargo, destroys his son's face. Vesalius succeeds in saving his son and moves the table out of the way.

Unfortunately, Vulnavia is surprised by Trout and his assistant as she is carrying out Phibes' command to destroy his mechanical creations. As she backs away from them, she is sprayed with the acid and apparently killed [or disfigured; the off camera scream she makes is the only sound she ever makes in both this movie and the sequel].

Convinced that he has accomplished his vendetta, Dr. Phibes retreats to the basement to inter himself in a stone sarcophagus containing the embalmed body of his wife. He drains out his own blood and replaces it with embalming fluid as the coffin's inlaid stone lid slides into place, completely concealing it. The Police and Dr Vesalius find that Phibes is gone; that the only plague he hasn't used is that of darkness, and they have a feeling they will see him again.... 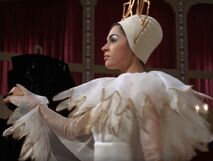 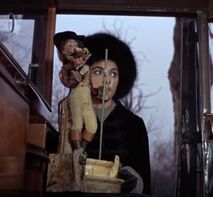 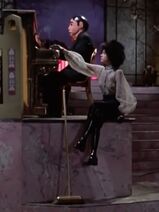 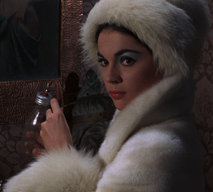 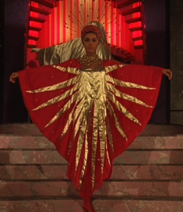 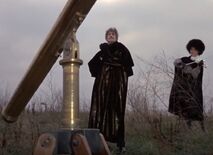 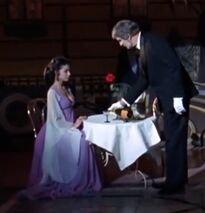 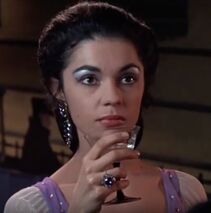 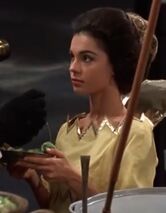 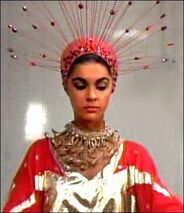 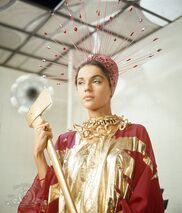 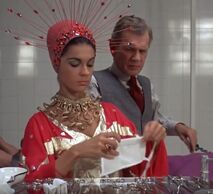 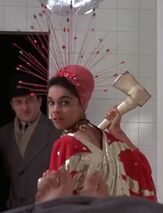 Add a photo to this gallery
Retrieved from "https://femalevillains.fandom.com/wiki/Vulnavia_(The_Abominable_Dr._Phibes)?oldid=186907"
Community content is available under CC-BY-SA unless otherwise noted.