Vivian Vixen (Susie Plakson) is the main villainess from "Under the Big Flop," the second segment from Johnny Bravo's first season finale (airdate December 15, 1997). She is an unscrupulous and greedy circus owner who was controlling Jungleboy with a mind control device; using him as her main attraction.

Vivian's goal was to use Jungleboy to become rich, but her control of him was noticed by Little Susie, who attended the circus with Johnny Bravo. Susie sent Johnny to distract Vivian, which Johnny (who was completely oblivious to Vivian's villainy) was happy to do due to his attraction to her. The villainess used her device to order Jungleboy to eject Johnny; a running gag that continued due to Johnny's persistence. Susie managed to take the mind control while Vivian's back was turned, only for Johnny to give it back to her in an attempt to impress her.

Vivian again orders Jungleboy to eliminate Johnny by placing him in a pot of boiling oil, where Vivian had Jungleboy's animal friends tied up. Susie later engaged in a struggle with Vivian over the device, which ended up going into the pot. The device now destroyed, Jungleboy was freed from Vivian's evil control, and after freeing his animal friends, he tossed Vivian inside a locked cage. Johnny freed Vivian and again flirted with her, only for the scheming vixen to make Johnny her new main attraction. 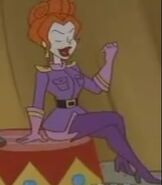 Add a photo to this gallery
Retrieved from "https://femalevillains.fandom.com/wiki/Vivian_Vixen_(Johnny_Bravo)?oldid=98941"
Community content is available under CC-BY-SA unless otherwise noted.