Violet is a complete psycho and does everything she can to destroy the Greer family that takes her in.  It doesn't take long for the family to be turned upside down as Violet uses her body to seduce and mainpulate them.

There is a fair amount of nudity in the movie. Violet performs oral sex on Joy's Ivy League boyfriend Michael (Greg Vaughan) while wearing a sadomasochistic cosume.

Violet then proceeds to destroy the relationships of all of Joy's other relationships.  She spikes the drink of Jaimie, Joy's tennis partner.  She then handcuffs Jaimie and undresses her and herself to their bra and panties. When Jaimie wakes up, she is convinced that she had sex with Violet.

Next, she targets Michael by seducing him into sex, and then providing him with cocaine to reignite his former addiction.

Ivan Greer (Michael Des Barres) is then seduced as Violet sabotages his date when she swims topless in his pool, and dresses in his late wife's clothing.  He is unable to resist her allure, and seduces him into sex later that night.

Mrs. B (Susan Tyrell) the housekeeper, quickly catches on to the events, and attempts to thwart Violet's schemes.

Michael confronts Violet while she is "street walking", telling her that he knows she doesn't work for Denny's, and is actually a high priced prostitute. Later that night, Violet knocks Michael out, ties him to a bed and gags him.  She then injects him with a lethal dose of drugs, killing him.

Joy returns from her tennis match, and learns of Michael's death.  She then walks in on her father and Violet in a session of sadomasochism.  As Joy runs out, Ivan tells Violet she must leave.  She hides Ivan's heart medicine and places him in the garage fatally poisoning him with carbon monoxide by leaving a car engine running.

Joy later returns to discover Mrs. B has also been murdered.  Violet induces Joy to dress up and play tea like they did when they were children, where they will commit suicide by drinking poison.  Joy resists by splashing the poison on Violet's face, and the two wrestle around the room.  Violet attempts to stab joy with a pair of scissors, but Joy is able to knock her back before she strikes.  Joy then races out of the room to the stairway, where she leans on the banister and cries for help.  Violet is spun around by Joy and begins to lose her balance at the top of the stairs.  Joy grasps the end of Violet's pearl necklace to keep her from falling.  Still holding on to the pearl necklace, Joy pleads with Violet to reach out and take her hand.  Instead Violet leans her head back, the necklace shatters, and Violet's feet slip.  This causes Violet to fall backwards to her death down the stairs. 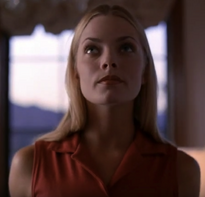 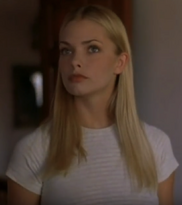 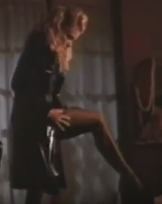 Add a photo to this gallery
Retrieved from "https://femalevillains.fandom.com/wiki/Violet_(Poison_Ivy:_The_New_Seduction)?oldid=216486"
Community content is available under CC-BY-SA unless otherwise noted.