Vilma was a gypsy who was invited to a Halloween party being held by Flo Blain, who was attending the party with her fiancee Steve.While Flo was away taking a phone call, Vilma approached Steve, surprised by the fact that he was the only man at the party who hadn't asked her to dance. After reminding Vilma that he was engaged to Flo, the pair went out to the forest, where Steve identified a strange tree Vilma took note of as a Philospher's Tree, rumored to be able to grant wishes made underneath it at midnight. It was then that Vilma revealed her intense romantic interest by kissing him, with Steve being taken aback by Vilma's charm.

As they kissed, however, Flo appeared and became enraged at the sight, driving her to wish for Vilma (who was dressed as a cat for the party) to turn into one before breaking up with Steve; all while Vilma watched with a satisfied grin before asking Steve to take her home. Later on, though, as Vilma boasted to herself that she'd have no trouble stealing Steve from Flo, she was horrified to see her fingers transform into claws, as Flo's wish had come true and she was beginning to transform into a vampiric cat creature.

Believing her transformation was a result of a gypsy curse, Vilma rushed to consult her grandmother, who informed her that there was no cure for the curse and that she had only one option to remain alive: kill someone every night by dawn, or she would become a cat forever. Having quickly accepted her fate, Vilma turned heel and began her killing spree, murdering a man in an alley. After committing the murder, the evil Vilma expressed contentment in saving herself and declared she would use her malevolent power to make her enemies suffer. After three days of killing, Vilma came to the Blain house under the pretense of making amends to Flo, learning in the process that she and Steve had reconciled. During the dinner, Vilma quickly grabbed a mouse from the floor, with Steve taking notice of the crazed look Vilma gave the creature. Later on, while having coffee on the terrace, Flo's dog Rex began barking at Vilma due to being aware of her being a cat, leading Vilma to claim the dog as her latest victim to keep him from exposing her villainous persona.

After Flo and Steve found Rex's mangled corpse, Flo confessed to Steve the wish she'd made after seeing him and Vilma kissing, though both dismissed the possibility that her wish could have come true. Vilma heard Flo's confession from afar, boasting to herself that Flo had granted her "the power she'd always wanted" before plotting to kill Flo. After distracting Steve into leaving Flo alone, Vilma attacked Flo and tried to kill her, only fleeing when Steve intervened and recognized the vampiric creature as Vilma. Realizing Vilma was behind the murders, Flo and Steve drove to Vilma's house, coming to believe she wasn't home due to the lights being out. But at that moment, Vilma appeared and revealed that she could see in the dark and had turned the lights out to trick the couple. Before she could attack, though, Steve was able to distract briefly with catnip. Now with only moments away from dawn, the evil Vilma prepared to kill Steve, only for him to fight back until dawn broke. Having not claimed a victim, Vilma transformed into a harmless cat, with text revealing that her evil powers were now contained. 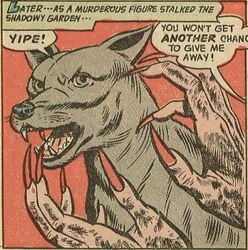 Vilma as she tried to attack Flo 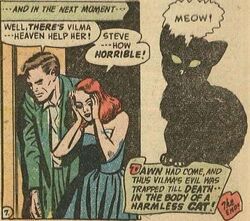 Vilma after being transformed into a cat
Add a photo to this gallery
Retrieved from "https://femalevillains.fandom.com/wiki/Vilma_(The_Vampire_Cat!)?oldid=142030"
Community content is available under CC-BY-SA unless otherwise noted.