Victoria Knox (Kyra Zagorsky) was a villainess from the 2016 film, Home Invasion (alternately titled, Forced Entry). She was the lone female member of a trio of thieves who broke into the home of main protagonist Chloe Paige.

Victoria first appeared at Chloe's home asking April (Chloe's best friend) for directions, only for her true reveal to come when Heflin Piers, the trio's leader and Victoria's lover, shot and killed her. The villainous triumvirate later entered the home and shut down the house's lights, leaving Chloe and her stepson, Jacob, to deal with the trio, which also included Jason Astor. The plan was to steal a valuable item (which was never revealed) that Chloe's husband, David, stole from him, which led to the trio killing David.

After removing their masked disguises, the evil Victoria searched for Chloe and Jacob, singing lullabies while doing so. She finally found the pair in the garage, where she engaged in a fight with Chloe before she was struck with a bat by Jacob. The villainess moved closer to Jacob before she was knocked out with a shovel by Chloe; after which she was tied up and gagged. Astor freed Victoria, who later captured Jacob in the film's climax and held him at knifepoint while Heflin ordered Chloe to open the safe, which had the item. A distraction allowed Jacob to escape, with Victoria pursuing him. Jacob later entered a truck and, upon seeing Victoria, ran over and killed the villainess. 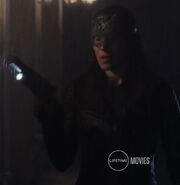 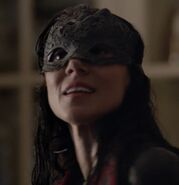 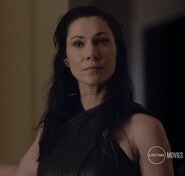 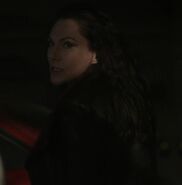 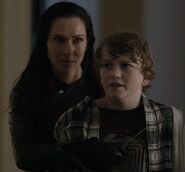 Victoria after being run over by Jacob
Add a photo to this gallery
Retrieved from "https://femalevillains.fandom.com/wiki/Victoria_Knox_(Home_Invasion)?oldid=196333"
Community content is available under CC-BY-SA unless otherwise noted.