The Female Villains Wiki
Register
Don't have an account?
Sign In
Advertisement
in: 2010s, Attempted Murder, Assassin,
and 21 more

Victoria Knox (Jessica Alba) is the main villainess of the 2015 film Barely Lethal. She was a female intelligence operative turned illegal arms dealer, with known ties to global clients. The film opened with the female agents of Prescott Academy (a school that taught orphaned girls to become assassins) pursuing Victoria, with Agent 83 (the film's main protagonist) going undercover in a mission to bring her in.

The mission had Victoria arriving in the desert with intent on executing a group of men, only to unmask the fourth as Agent 83 before getting a scuffle with the agent. After 83 latches herself and Victoria to the passing jet of her boss Hardman, Victoria suddenly produced a knife and used it to cut the rope, sending 83 falling into the water below. After Victoria was confronted by Hardman on the jet, Victoria teased him with their implied (at that point) history and about 83's disappearance, who would later be labelled MIA.

Later on, as Victoria was interrogated by Hardman, her past with him was revealed: she was a former agent (known as Agent 1) with Prescott before turning heel. In response to Hardman's offer to let her back into Prescott if she cooperated with them, Victoria proclaimed that Hardman destroyed lives; likely referring to the ones of the orphans he enlisted. Later on, after learning that Agent 83 had actually survived the fall and had taken on the alias Megan Walsh to lead a normal life as a teenager, the evil Victoria escaped prison with help from her henchmen, killing several Prescott operatives to do so and leaving a death threat for Megan.

It was after Megan and Liz Larson (the daughter of the family she was staying with under the guise of a foreign exchange program) were involved in a car chase that Megan realized one of Victoria's cohorts was Heather, a rogue Prescott agent who was also Megan's long-time rival. After she and Liz subdued Heather when she attacked Megan at their Homecoming dance, the pair returned to the Larson house to find that Victoria and her henchmen were holding Mrs. Larson and Parker Larson (Liz's younger brother) hostage. After Megan subdued one of Victoria's henchmen and entered the room armed with a pair of pistols, Victoria mockingly welcomed Megan and stated that her reason for coming after Megan was revenge, while revealing that she was the first assassin Hardman had ever trained at Prescott.

Megan was forced to disarm herself when one of Knox's mercenaries brought Liz into the house at gunpoint and Victoria simultaneously threatened Mrs. Larson and Parker, with Victoria arguing against Megan's demand for the Larson family to be let go by claiming they were involved now before offering Megan (while holding her at gunpoint) the chance to work for her, claiming they had a lot in common. Megan responded by calling Victoria a "psycho bitch" before claiming that Prescott had "lower standards" when Victoria was brought on, prompting Victoria to challenge Megan to a fight. After the brawl, Victoria held Megan at gunpoint and, after seeing her looking off expectedly, teased her that Hardman didn't care about her and wouldn't be coming to her rescue. It was then that Parker distracted Victoria and her men by setting off one of Megan's smoke grenades, and it was soon after that Victoria was knocked out when Hardman's agents arrived and shot her and her mercenaries with tranquilizer darts. Victoria was promptly re-arrested (off-screen) for her various crimes. 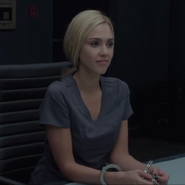 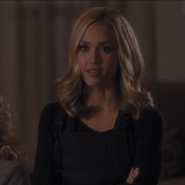 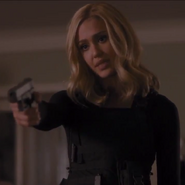 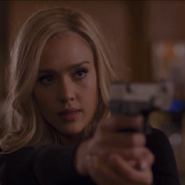