Start a Wiki
watch 01:48
The Loop (TV)
Do you like this video?
Victoria (Tandi Tugwell) is the hidden main villainess from the 2018 Lifetime film, A Mother's Worst Fear (alternately titled, A Mother's Greatest Fear and A Wicked Vendetta; airdate October 6, 2018).

Victoria is the assistant to Alice and Brent Gould at the couple's property management company. However, Victoria was also an adulteress, as she was having an affair with Brent, with the illicit relationship originally beginning two years before the film's events. She was assured by Brent that they would be together, not only as business partners, but in life as well, as he informed her that he would leave Alice. In recent months, though, Victoria became upset at Brent over breaking their dates, with the boiling point being Brent not taking his mistress to a business trip in New York, which was planned as a romantic getaway.

In a twisted attempt to test Brent's loyalty to her, Victoria turned heel and planned to abduct Brent and Alice's teenage daughter, Maddy Gould. The villainess tracked Maddy to Nicole's (Maddy's best friend) home, and spotted her as she was leaving a party once alcohol became a factor. At that moment, Victoria--donning a hoodie and a mask--drugged Maddy with chloroform and took her to the storage room of her parents' office, where she was tied up and gagged. Victoria covered up her villainous role in the film, though hints of her persona as a villainous madwoman were shown during her most recent call to Brent, as she stated that he had no idea what she was capable of.

Victoria had thwarted Maddy's attempts to escape, but her latest one saw her struggle with the villainess and accidentally remove her mask, revealing Victoria as her abductor. Shortly after her reveal, the evil Victoria informed Maddy about her affair with Brent, and stated that her actions were committed to see who Brent would reach out to:  her or Alice. After seeing that Brent chose his wife, the deranged villainess stated to Maddy that she will plan to sell her to the mob, saying that she can at least get paid for her actions. Alice figured out that Victoria was the culprit, and seeing Maddy's high heel shoe in Victoria's drawer was proof, leading to Alice, Brent, and Steve heading to the storage room, where they encountered Victoria with Maddy.

While holding Maddy at knifepoint, Victoria lashed out at Brent for breaking his promise to her, while stating that she took Maddy to test Brent's devotion to her. The trio attempted to get through to Victoria, but the villainess spitefully refused to listen to them and raised her knife in an attempt to kill Maddy, only to be taken down by Alice. Police arrived and held Victoria under arrest for her evil crimes, with Alice firing the deranged woman to add insult to injury. 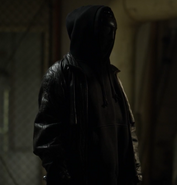 Victoria in her villainous disguise 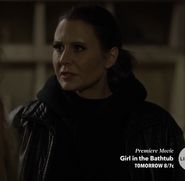 Victoria revealing her plans for Maddy 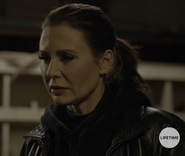 Victoria holding Maddy at knifepoint
Add a photo to this gallery
Retrieved from "https://femalevillains.fandom.com/wiki/Victoria_(A_Mother%27s_Worst_Fear)?oldid=185132"
Community content is available under CC-BY-SA unless otherwise noted.