Vesta was the Roman goddess of the hearth, and back when the Roman pantheon was in power, she received six virgin sacrifices a year. The sacrifices had to have been virgins for at least 30 years, otherwise they would be buried alive. Vesta lost many followers following the rise of Christianity, but ironically, she would use the religion in her own villainous quest to abduct virgins.

Jody and Sam figured out that Vesta was behind the abduction, and it was when they were searching to rescue Dean and the others that they encountered the villainous goddess, who was revealed to be Bonnie. While holding Jody captive, the evil Vesta ranted that virgins used to begged to be sacrificed to her, until "that hippie from Bethlehem" (Jesus Christ) ruined things for her and forced her to do things on her own. She also ranted about the people she took being born-agains, while revealing that she would eat their livers during the sacrifices. Vesta planned to do the same to Jody, even stabbing her with a stake, which Jody pulled out while Sam fought the goddess. The villainess was stunned that Sam was alive due to her discovery that he was in terrible shape internally (Gadreel's possession was keeping Sam alive). During her bewilderment, Vesta was killed by Jody, who stabbed her with a stake that had virgin's blood on it. 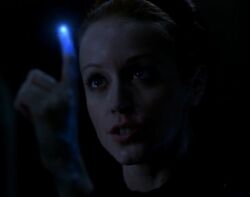 Vesta killed by Jody Mills
Add a photo to this gallery
Retrieved from "https://femalevillains.fandom.com/wiki/Vesta_(Supernatural)?oldid=164020"
Community content is available under CC-BY-SA unless otherwise noted.