Vermouth aka Sharon Vineyard aka Chris Vineyard (Mami Koyama) is a recurring villainess from the anime series Case Closed.

Vermouth is a member of the elusive Black Organization, an expansive crime syndicate responsible for creating the drug APTX 4869, which was used by Black Organization members Gin and Vodka to poison teen detective Shinichi Kudo (the series' main protagonist) when he stumbled across a meeting the two were having with a conspirator. Rather than killing Shinichi, however, the drug caused him to regress to child size, leading Shinichi to take on the name Conan Edogawa to avoid having the syndicate learn he was still alive. Vermouth was also revealed as being a master of disguise, to the point of even crafting a history between two of her false personas: actress Sharon Vineyard and her estranged daughter, Chris.

The anime's current events has Vermouth searching for Shiho Miyano/Sherry, a former member of the Black Organization who had fled the syndicate after attempting to commit suicide using APTX 4869, only to regress to child form as Shinichi had. Vermouth's goal was to find Shiho (who had taken on the alias Ai Haibara) and kill her for defecting from the Black Organization. Vermouth's earliest encounter with Shinichi, however, occurred prior to his being poisoned by Gin and Vodka, as captured in the 3-part Season 11 premiere, "Shinichi Kudo's New York Case". In the episode, Vermouth (in the disguise of a serial killer plaguing New York) attacked him and his friend Ran Mouri on a fire escape while the two were trying to retrieve Ran's hankerchief, having been trying to use her disguise to lure out and kill FBI agent Shuichi Akai. During the attack, Vermouth nearly fell off the ladder to her death, only to be pulled to safety by Ran and Shinichi. As a result, Vermouth appeared to gain a fondness for Shinichi/Conan and Ran, even to the point of protecting them whenever she could during their encounters.

Vermouth's first direct encounter with Conan Edogawa and company came in episode 13.13, "Head-to-Head Match with the Black Organization: A Dual Mystery on a Full Moon Night", which had Vermouth inviting Conan/Shinichi to an off-season Halloween party where she assisted an attendant in murdering author Senzo Fukura, having previously contacted him online and exploited his hatred for Fukura and threatening to kill the man's family if he refused to go through with the murder. Later on, while Jodie Starling was driving an ill Haibara to see Dr. Tomoaki Araide, Jodie was tailed by Vermouth, who was disguised as Araide. During their confrontation, however, Jodie was quick to uncover that "Araide" was an imposter and also revealed her connection to Vermouth: she had murdered her father under her "Chris Vineyard" persona, shooting him dead and staging the scene to look like he committed suicide. Afterwards, Vermouth encountered a young Jodie before setting the house on fire as she left in an attempt to kill her as well as destroy all the evidence Jodie's father (an FBI agent) had against her.

After detailing how she'd found Vermouth and thwarted her attempt to kill Araide to disguise herself as him permanently, Jodie asked Vermouth why she wanted to kill Shiho/Haibara, while also asking about why she would only try to kill her when Conan wasn't around. In response to Jodie's questions, Vermouth attempted to pull out her gun, only for Jodie to pull hers out first and fire at her to disarm her. While holding Vermouth at gunpoint, Jodie then gave the villainess another inquiry: why she never aged, as she looked the same as she did when she killed Jodie's father. Before Jodie could get her answers, however, a sniper (later identified as Black Organization member Calvados) fired a bullet into Jodie's abdomen, allowing for Vermouth to disarm Jodie as she revealed how she'd manipulated the FBI previously into helping her track down Shiho/Haibara.

Just as Vermouth was prepared to kill Jodie, however, she was once again disarmed, this time by "Haibara" using Conan Edogawa's Anywhere Ball Dispensing Belt. It was then revealed that Haibara was actually Conan himself, having colluded with Jodie in order to capture Vermouth (with Heiji Hattori disguising himself as Shinichi Kudo at the Halloween party to solve the case there, with Conan/Shinichi's assistance). Just as Conan was preparing to force Vermouth with his stungun watch to drive to the police station, Haibara arrived at the scene, having followed Conan using his tracking glasses in an attempt to give herself up to Vermouth. Taking advantage of the distraction, the evil Vermouth used Conan's stungun watch to knock him out before pullilng out a gun and pointing it at Haibara, intent on killing them all to cover her tracks. But before she could, Ran suddenly came out of the trunk of Jodie's car and ran to Haibara, with Vermouth orderig Calvados not to shoot her. Ran then shielded Haibara from Vermouth, with the villainess attempting to fire shots around Ran to get her to move. The distraction allowed for Jodie to shoot Vermouth in the arm, with FBI agent Shuichi Akai appearing soon after (having subdued Calvados) and shooting Vermouth with his shotgun. Vermouth survived due to wearing a bulletproof vest, and escaped after taking the incapacitated Conan as a hostage, firing a bullet at Jodie's car's oil tank as she drove away to make it explode.

After fleeing the scene, Vermouth received a text from Renya Karasuma, the Black Organization's boss, chiding her for (in his mind) failing him again before asking her to return to him immediately. It was then that Vermouth found that Conan was outfitted with a covert listening device, with Conan waking up and telling Vermouth that her boss's email address would be sent to his partner (Professor Hiroshi Agasa) if she disconnected the system or killed him. Vermouth initially appeared to give in to Conan's demand to take him to her boss, only to instead spray a sleeping gas from her phone, informing Conan that she would postpone her plan on killing Haibara for now before he managed to fire a bullet into Vermouth's leg prior to fainting. Conan then awoke to find Vermouth had fled after destroying the device to erase the evidence he had against the Black Organization, with Vermouth later calling Gin to inform him that she believed Conan/Shinichi was capable of taking down their criminal ring, referring to him as their "silver bullet".

Vermouth's next appearance occurred in episode 14.36, "Black Impact! The Moment the Black Organization Reaches Out" (airdate January 9, 2006), which had her joining Gin, Vodka, Chianti, Korn, and Hidemi Hondou (later revealed to be a CIA agent working undercover to take down the Black Organization) in a plot to assassinate Shuugiin candidate Yasuteru Domon due to his budding political influence. Due to her having killed Calvados previously, Chianti and Korn were shown to have disdain for Vermouth, only for Gin to assure them she was only joining the plot as a precaution. After Conan and Jodie halted the group's original plan, Vermouth was brought in to help in their new plan to kill Yasuteru.

The plan had Vermouth disguising herself as an injured Kiriko Busujima (an employee of Desankai) and fall off her motorcycle after driving in front of Yasuteru's limo, with the group planning to utilize Yasuteru's attempt to help Vermouth as their chance to have Hidemi kill him. All the while, Vermouth was aware that Conan and Jodie were on their trail due to seeing them back at Haido Park (the site of her group's initial assassination plan), but kept quiet about her discovery. After the tracking device was discovered and the quintet's attempt to kill Kogoro (who Gin believed responsible for the device's placement on Hidemi) was thwarted by Conan, Vermouth argued against Gin's attempt to have Chianti kill Kogoro and Conan, stating that Kogoro had no knowledge of their activities. After being briefly held at gunpoint and grilled by Gin, the group was forced to flee when Shuichi opened fire on them, with Gin deducing that Vermouth had some sort of soft spot for Kogoro. This was later proven somewhat truthful, as Vermouth had taken a liking to Conan and Ran (Kogoro's daughter) after they saved her life in New York; a fondness she would maintain in spite of her continued allegiance to the Black Organization as the series progresses. 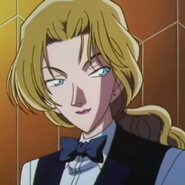 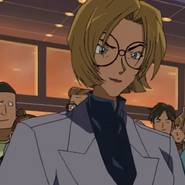 Vermouth in her "Sharon Vineyard" persona 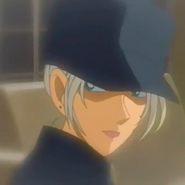 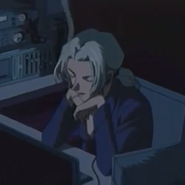 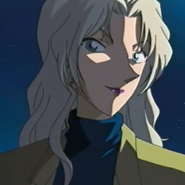 Vermouth's evil grin as she prepared to kill Jodie 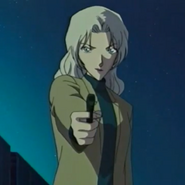 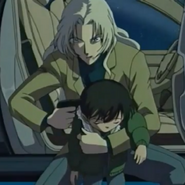 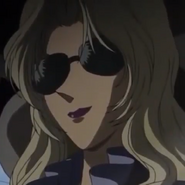 Add a photo to this gallery
Retrieved from "https://femalevillains.fandom.com/wiki/Vermouth_(Case_Closed)?oldid=222034"
Community content is available under CC-BY-SA unless otherwise noted.