Start a Wiki
watch 01:48
The Loop (TV)
Do you like this video?
Vera Merchants (Missi Pyle) is the main villainess in the 2002 American made-for-television Christmas family comedy film, "Home Alone 4: Taking Back the House".

Vera Merchant is the wife of Marv Merchants (French Stewart), who had just been released from prison.  After their marriage, they became partners in crime, replacing Marv's longtime partner Harry Lime.

Vera ssumed they would carry out burglaries together, but Marv opted out of this type of crime due to his failed attempts with Harry.  Instead, he came up with a plan to kidnap the Prince who was visiting the mansion of Natalie (Joanna Going), whom his mother Molly (Barbara Babcock) worked for undercover.

When Natalie and her boyfriend Peter go away for the day and Molly goes out, Vera and Marv go to break into the house.  However, Peter's son Kevin McCallister (Mike Weinberg) is home alone.

When Kevin spots them, he lures the pair to the bathroom and turns on the water taps, which causes the place to flood and swept the pair away and down the stairs.

Marv identifies Kevin as the culprit, and he and Vera make their escape before anyone gets home.  Marv gets angry and worried at Kevin's return as he had failed his plans on two previous occasions.  However, Vera reminded him he was just a little boy.

On the night of the Royal Family's apparent arrival, Vera and Marv go undercover as waiters to scout out the house once again.  Going into the room believed to be set up for the Prince, Marv put Vera in a bag to practice how they would kidnap him.  Unfortunately, Kevin sabotaged it and caused Marv and Vera to fall from a window.

They returned to the house to "kill" him, but ended up having lots of food thrown over them by Kevin.  As a result, Marv fell on a burning hot oven and ended up retreating with Vera.  The whole night proved pointless and the Royal Family's flight was delayed.

On Christmas Day Molly locked Kevin and butler Prescott in the wine cellar to wait for the Royal Family's arrival.  Kevin escaped and after putting Vera and Marv through more mayhem, they ended up being knocked out.  When the police arrived, Vera and Marv attempted one last escape but got tripped up by Kevins's brother and sister and ended up flying into the bushes.  They were arrested and taken into the back seat of the police car. 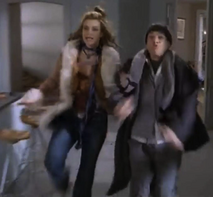 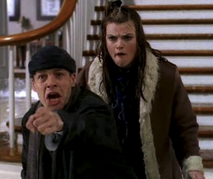 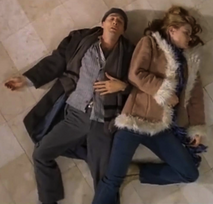 Add a photo to this gallery
Retrieved from "https://femalevillains.fandom.com/wiki/Vera_Merchants_(Home_Alone_4)?oldid=202236"
Community content is available under CC-BY-SA unless otherwise noted.