On Olympus, the wicked goddess Venus is manipulating the sons of Jupiter, which include Vulcan and Mars. She is overly flirtatious and seems to be excited by the fact they are fighting for her affections. Mars and Vulcan end up fighting with each other and are punished by being deprived of their powers.

Furious, Mars flees Olympus with Venus and heads to Earth, they make camp with a King on Earth, and plot to overthrow Jupiter, and rule as King and Queen. Mars and Venus ask for a tower to be built to reach Olympus, but are told there are not enough men, so more slaves are brought in to build it.

The slaves arrive to build the tower, and are immediately whipped into submission. Venus is making out with Mars and stops to sadistically grin and laugh at the suffering slaves.

At some point Vulcan arrives on Earth too, and discovers a woman called Aetna, who is smitten with Vulcan, a feeling he later express too. The two heroes eventually do battle with the villainous duo of Mars and Venus. A catfight involving whips occurs between Aetna and the evil Venus.

As the battle is about to reach its climax, with Vulcan trying to kill Mars, Jupiter intervenes from above. He summons Mars and Venus back to Olympus to be punished. 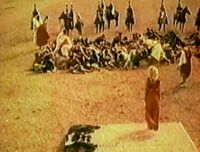 Venus enjoys watching the whipping of the slaves

A catfight between the good and evil babes

Venus is summoned back to Olympus to be punished for her treachery
Add a photo to this gallery
Retrieved from "https://femalevillains.fandom.com/wiki/Venus_(Vulcan,_Son_Of_Jupiter)?oldid=75588"
Community content is available under CC-BY-SA unless otherwise noted.