Start a Wiki
watch 01:51
The Loop (TV)
Do you like this video?
Lady Velrose is a villainess who appears in Volume 1: Chapter 5 of the manga Sorcerer Hunters (爆れつハンター). She also appears in episode 3 of the anime, where she is named Barbara Ouiblert (バルバラ・オイブラード).

She is a rich young woman who lures young men back to her mansion with two possible intentions in mind. If she thinks they are handsome she turns them into stone statues to add to her collection. If they aren't good looking then she enjoys torturing them.

She is first seen in a carriage in town, from the window she watches the protagonist Carrot. She orders her servant to bring Carrot to her mansion. Later she greets Carrot at her mansion and tells him she wants to show him a collection, they both go downstairs where Carrot discovers the collection of statues and asks Velrose if she plans to turn him into stone as well, Velrose doesn't think he is good looking enough for the collection and instead decides to torture him, she takes pleasure in whipping him and grinding his head with her high heels.

During his torture, Carrot's friends had followed up a lead and managed to trace him to Velrose's mansion. A girl called Tira bursts into the room and fights Velrose, they go back and forth until Velrose manages to activate a trap door beneath Tira. Carrot manages to grab a hold of Tira's arm before she can fall into the pit full of spikes below her. Velrose enjoys the situation and decides to play a cruel game that involves whipping Carrot until he can no longer hold on to Tira.

Eventually Tira appears to fall into the pit and Velrose laughs and walks over to see what her corpse looks like on the spikes. Tira is OK though and manages to raise herself out of the pit just as Velrose walks near to it, at the same time she sends Velrose plummeting down onto the spikes below, killing her.

Lady Velrose's public face, she appears to be sweet and innocent but has a black heart 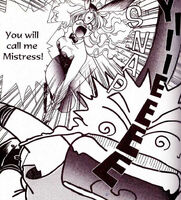 Enjoying torturing Carrot with her whip 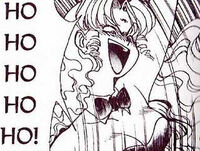 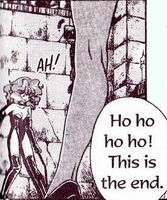 Cornering Tira with cruel intentions on her mind

Enjoying Tira's unfortunate situation as she hangs helplessly over the spikes 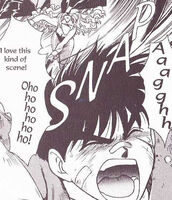 Sadistically whipping Carrot as he tries to help his friend, hoping he will drop her onto the spikes below

Sadistically whipping Carrot as he tries to help his friend, hoping he will drop her onto the spikes below

Laughing about her apparent success of sending Tira to her death 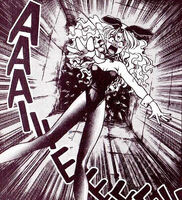 Tira is not dead however and escapes, at the same time sending the evil Velrose to her death in the pit of spikes
Add a photo to this gallery

In the anime she meets her demise in a different way to the manga. The story is similar until near the end where there is no scene involving a trap door with a pit of spikes. Instead Carrot absorbs Barbara's evil magic to transform himself into a giant beast like creature. He then crushes Barbara to death under his foot. 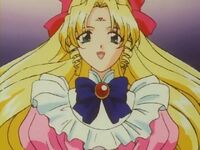 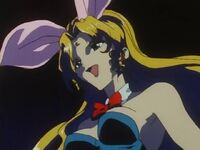 Barbara reveals her sadistic side 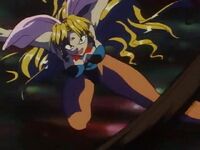 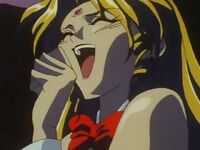 Letting out an evil laugh

The evil Barbara is crushed to death
Add a photo to this gallery
Retrieved from "https://femalevillains.fandom.com/wiki/Velrose/Barbara_Ouiblert_(Sorcerer_Hunters)?oldid=194479"
Community content is available under CC-BY-SA unless otherwise noted.