To have her daughter constantly win.
To see that the Beverly Hills Troop never become Wilderness Girls.

Velda Plendor (Betty Thomas) is the main antagonist in the film Troop Beverly Hills. She was a spiteful, strict scout camp leader who was obsessed with winning, especially if it came from her own daughter who was in a troop of that same camp. Velda refused to accept Troop Beverly Hills as Wilderness Girls and went to great lengths to ruin their chances.

Velda was with the Wilderness Girl scout leaders deciding that without a troop leader or constant attendance, the Beverly Hills troop would never be put into effect, however a new Troop Leader application has been submitted by Phyllis Nefler and they decide to give it a chance.

During a meeting with all the troops and leaders, Velda at once shows her dislike for Phyllis when she walks into the hall wearing an unspeakably terrible outfit and shunned all the ideas she had for the troop.

When she gives Phyllis an idea of camping out under the stars, her troop literally think of Hollywood and camp under the Hollywood sign. Velda sees them an incompetent troop who will never be Wilderness Girls after finding out that they had sheltering at a hotel when it had been raining.

She then then sends her assistant Annie to spy on Phyllis and her troop to get evidence that they are not fit to be Wilderness Girls while using a hidden camera built into a Wilderness Girls Handbook.

She harshly threatens Annie of giving her a humiliating job at Kmart if she doesn't get what she needs, so the terrifying assistant is forced to obey. After she gets the pictures, she presents them to the main head leader Francis Temple who dismisses her outrageous claims and decided to keep the troop on. Having failed with this plan, Velda refuses to give up and decides to take more extreme measures by making Annie move in with Phyllis to get more information.

Later on the day of cookie ordering, Velda makes Beverly Hills hand back their patches, but that does not break their spirit for they outbid their rival troop the Red Feathers (who Velda's daughter Cleo is part of) out of 2,000 boxes. Meanwhile Annie has a change of heart and throws away Velda's spying device, not wanting to do her dirty work anymore and becomes friends with Phyllis and the troop.

Velda gets a call from Phyllis, saying that her troop sold 4,732 boxes, but the hard-hearted woman still isn't convinced by their efforts, although she accepts an invitation from her at the black tie ceremony where she never sows any gratitude for being invited and snatches the well earned cheque away from Phyllis before departing, even less pleased when Phyllis announces that her troop will take part in the Annual Wilderness Jamboree.

Next day, she visits Phyllis and discourages her from participating saying that it was no place for credit card, back yard moving Beverly Hill residents, however the troop still shows up much to her dismay just as she is about to start a flag retrieving race. But Velda starts off the starter's pistol the moment the troop drives in, making them rush to catch up. Velda then harshly fires Annie for siding with Beverly Hills.

She is certain that Beverly Hills will never survive and gleefully watches the Red Feathers trekking out of the foliage, but then sees Beverly Hills rushing out as well, apparently being chased by a skunk. She takes her frustration out on the smelly creature and eats it, wearing the skin as a hat.

Desperate to have her daughter's troop win, Velda then tells the leader of the same troop to go on sick leave so she can lead the Red Feathers herself. They cheat by using a short cut rather than the course that Velda had officially mapped out. One of the girls warned Velda that the route is for hunters and trappers, but she refuses to listen and falls into a hole trap, breaking her ankle. Instead of helping, the others leave her there, even her daughter who promise to come back after they win.

Troop Beverly Hills find her and are at first reluctant to help Velda for all the misery she caused them, but Phyllis reminds them that Wilderness Girls always helps those in need, even their enemies, so they carry her back to the finish line with Velda shouting ungrateful abuse all the way.

Meanwhile Cleo and her troop arrive at the finish line but they were disqualified by Francis who was there to meet the winning team for returning without their leader, but Cleo grabs the trophy and runs away. Meanwhile Troop Beverly Hills cross the finish line and they are declared the real winners. Velda protests and after insulting Francis, who has had enough of her spiteful, bullying attitude, gets fired. Velda storms off vowing to make her own troop and drives away in her jeep in spite of her broken ankle.

At the end of the film, she gets her full comeuppance when she is seen doing the exact same thing that she had threatened Annie with: a humiliating job at Kmart where she puts out a call for a special offer on cookies. 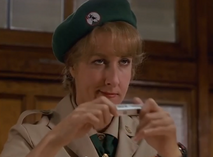 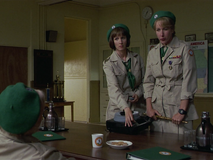 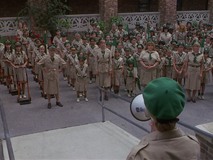 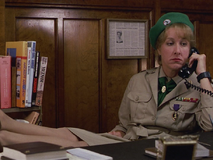 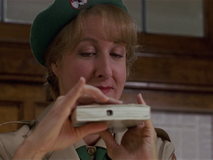 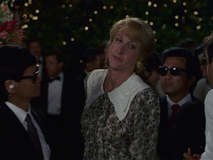 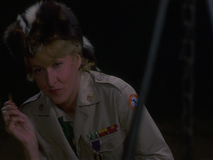 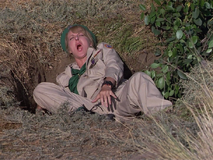 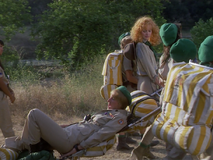 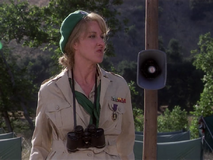 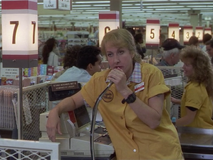 Add a photo to this gallery
Retrieved from "https://femalevillains.fandom.com/wiki/Velda_Plendor_(Troop_Beverly_Hills)?oldid=187702"
Community content is available under CC-BY-SA unless otherwise noted.