Varla and her cohorts Billie (Lori Williams)  and Rosie (Haji)  are go-go dancers who one day drive out in the desert for a little fun. Varla, possessing the largest cleavage and a domineering personality, is evidently the leader of the group. After a game of chicken with sports cars which Varla easily wins, the group comes across a young, naive girl, Linda (Susan Bernard). When Varla starts tormenting Linda, Linda's boyfriend Tommy (Ray Barlow) intervenes. Varla challenges Tommy to a fight, which ends with her killing him by breaking his neck. Varla drugs and kidnaps Linda.

Later, at a gas station, they encounter an old wheelchair-bound man (Stuart Lancaster) and his dim-witted, muscle-bound son, "The Vegetable" (Dennis Busch). The gas station attendant (Mickey Foxx) informs them that the old man is in possession of a large amount insurance money from a railway accident. Varla hatches a scheme to steal the money.

Following the old man back to his ranch, the girls are served lunch by him, the Vegetable and his other son Kirk (Paul Trinka). Varla takes steps to seduce Kirk to goad the money's location out of him (suggestively staring at him while eating corn on the cob) while Billie watches Linda. Varla's plan is interrupted when Billie gets drunk and lets Linda escape. The old man (a misogynist who planned to rape Linda) and the Vegetable track her down. Intermediate events lead to Kirk deciding to save Linda and take her into town on foot (the old man threw the truck keys away).

With Kirk and Linda gone, Varla decides to kill the men and Linda. Billie, a habitual complainer, refuses to go along, so Varla kills her by throwing a knife in her back. As the old man and the Vegetable return, Varla and Rosie kill the old man by running him over with a truck. The money falls out of a compartment in the wheelchair. The Vegetable retaliates by stabbing Rosie to death with the knife he retrieved from Billie's back. Varla is angered (showing that she does care about someone) and rams the Vegetable against a wall with a car, badly injuring and incapacitating him. She then tracks Linda and Kirk down, chasing them into a gully with the old man's truck. Kirk fights her, but is almost defeated until Linda runs Varla over with the truck. Varla is seemingly about to hit Kirk again, but dies from her injuries before she is able to.

Empowered by a large cleavage, intimidating presence and a smart mouth, Varla is a dangerous woman who is able to get whatever she wants and stops at nothing to get it. She stays in authority by yelling commands and nasty remarks at her cohorts, and has a militant feminism about her, disparaging the young girl for her submissiveness to a man (her boyfriend). She is also rather sadistic, at least when it comes to men, killing the boyfriend seemingly just for her own amusement. However, she is also capable of showing a softer side, untying her hostage to let her have a shower and being somewhat of a friend to Rosie. 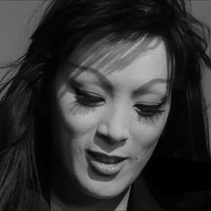 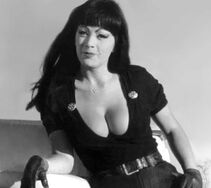 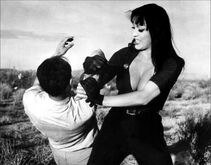 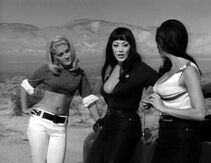 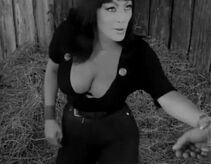 Add a photo to this gallery
Retrieved from "https://femalevillains.fandom.com/wiki/Varla_(Faster,_Pussycat!_Kill!_Kill!)?oldid=194639"
Community content is available under CC-BY-SA unless otherwise noted.