Start a Wiki
watch 01:48
The Loop (TV)
Do you like this video?
Vanilla Sundae (C.K. Steefel) is a secondary villainess in the 1996 PC point-and-click adventure game "Ace Ventura: The CD-Rom Game" by developer 7th Level.

Vanilla is the right hand woman of the game's main antagonist, Phatteus Lardus. She invites Ace Venture to Exotica's Headquarters in Bavaria where he learns of Phatteus's diabolical plan to kill animals and sell pieces of their bodies for profit. Ace dresses up as an opera singer to fool Vanilla, but she sees through his disguise and attacks him. Ace is aided by his monkey friend, Spike, who drops sandbags onto Vanilla's head. Ultimately, the pet detective is victorious and shoots Vanilla out of a cannon and into a bathroom that had just been recently polluted by Phatteus. 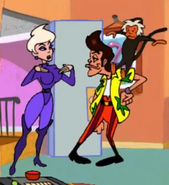 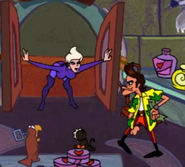 The jig is up

Well, I suppose that fighting is what they're doing...

Momentarily stunned by the sandbag

The big finish
Add a photo to this gallery
Retrieved from "https://femalevillains.fandom.com/wiki/Vanilla_Sundae_(Ace_Ventura:_The_CD-Rom_Game)?oldid=169197"
Community content is available under CC-BY-SA unless otherwise noted.