Vanessa Warfield is an evil babe from the 1980s cartoon series M.A.S.K.

She is the only female member of the criminal organisation V.E.N.O.M. She appeared in 53 of the 75 episodes of the series (here is a list). She is an espionage and intelligence expert of V.E.N.O.M. and sometimes acts as second in command in absence of the leader Miles Mayhem. During the fights, she uses a mask which creates an electronic whip to bound or hurt her enemies, and uses her flying car to attack in the vehicle battles. She loves to fight dirty and attacks from behind. She thinks she is better than her team mates and she mocks them often (even the boss Miles). Her arrogance and her overestimation of her own skills are often the reason she loses the fights with the members of M.A.S.K. Since the bad guys always escape through the whole series and there are no hand to hand combat, she often got defeated in different ways.

Vanessa Warfield has a malicious and taunting personality. She usually relies on her disguise and infiltration expertise to accomplish a mission, but also her demolition skills are used on several occasions. When she is forced to fight, she fights dirty. Taking advantage of her mask and vehicle, she is an aggressive enemy that goes right for her target. She is known for teasing Sly Rax on more than one occasion or taking delight in the mishaps of other V.E.N.O.M. agents.

Vanessa shows affection towards her trained ravens in the episode "Riddle Of The Raven Master", but she is not as caring to her V.E.N.O.M. comrades (or men in general).

Vanessa Warfield as toy
Add a photo to this gallery 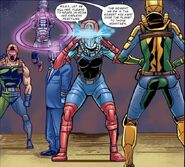 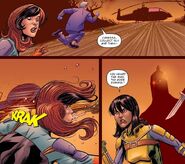 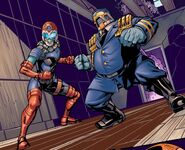 Behind the Scenes Edit

Retrieved from "https://femalevillains.fandom.com/wiki/Vanessa_Warfield_(M.A.S.K.)?oldid=195141"
Community content is available under CC-BY-SA unless otherwise noted.