Vanessa Brooks (Sanaa Lathan) is an antagonist in the 1998 horror film "Blade".

Vanessa was the mother of the vampire hunter Blade (Wesley Snipes).  While pregnant, Vanessa was bitten by a vampire and drained of most of her blood.  The trauma of the attack caused her to go into premature labor and she had an emergency c-section after being taken to the hospital.  Eric, her baby, survived while his mother died from loss of blood.  However, the vampire who had bitten Vanessa had infected her with his own blood, causing her to turn into a vampire.

Vanessa would become a mistress of Deacon Frost (Stephen Dorff), the vampire who had turned her.  She spent the next thirty years murdering humans to feed on their blood.  Meanwhile, her half-vampire son Eric spent his childhood on the streets feeding on the homeless until he was taken in by Abraham Whistler and trained to hunt vampires under the name Blade.  Mother and son would not meet until the day Blade assaulted Frost's lair in order to thwart his plan to resurrect the blood god La Magra.

After Blade infiltrated Edgewood Towers, he entered Frost's chambers where he met Vanessa for the first time.  Letting his guard down, Blade was quickly subdued by Frost's henchman whe then locked him inside a coffin-like device that drained his blood for the resurrection ritual.

Blade was then freed from his coffin by Karen Jensen (N'Bushe Wright) who let him feed on her blood so that he could regain his strength.  Vanessa approached and tried to subdue her son once more.  After a brief fight, Blade pinned Vanessa to the wall and prepared to stake her. Vanessa tried to manipulate her son into sparing her.  However, Blade didn't fall for her ruse and impaled her through the heart.  Vanessa screamed before she disintegrated into ash. 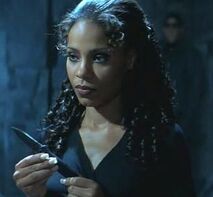 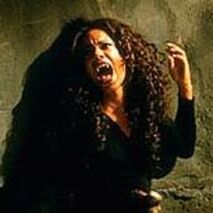 Add a photo to this gallery
Retrieved from "https://femalevillains.fandom.com/wiki/Vanessa_Brooks_(Blade)?oldid=206968"
Community content is available under CC-BY-SA unless otherwise noted.