Vanessa is a villaness from the 331st Fansadox story Smugglers Cove by Glowsester. Vanessa was a fear drug dealer, in charge of a smuggling operation on a deserted island somewhere in South America. A newly engaged couple, Zach and Emily by chance stumbled upon her operation on a romantic getaway.

Vanessa and her two cohorts stripped the two lovers of their clothes and began to sexual abuse and rape them. Their enjoyment ended when a rival drug group ambushed them, killing Vanessa's henchmen.

Due to her notorious reputation, her captors took great enjoyment in her suffering. Vanessa then suffered the same fate as her captives, being treated as a sex toy. Later she was sold alongside Emily at a prostitution ring in Colombia. 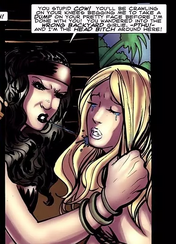 Vanessa threatening and degrading one of her captives

Vanessa captured
Add a photo to this gallery
Retrieved from "https://femalevillains.fandom.com/wiki/Vanessa_(Smugglers_Cove)?oldid=196153"
Community content is available under CC-BY-SA unless otherwise noted.