Start a Wiki
watch 01:48
The Loop (TV)
Do you like this video?
Valerie Sanders (Lauren Plaxco) was the hidden main villainess from the 2018 Lifetime film, Mistress Hunter (airdate March 16, 2018).

Valerie Sanders is one of the best friends of main protagonist Jackie Blancher; so much so that she is referred to by Jackie as an "aunt" to Jackie's ten-year-old daughter, Mikayla. However, Valerie was also having an affair with Jackie's husband, Karl, but became distraught when Karl ended their illicit relationship. When she learned that Karl had another mistress, a woman named Beth Robinson, Valerie's heartbreak turned to anger. After Jackie found out about Karl and Beth, Valerie posed as a supportive friend for Jackie and suggested acquiring the services of a "mistress hunter."

Jackie took Valerie's advice and hired the Mistress Hunter, Hannah Armington, to track Karl and Beth. Hannah took various photos of the couple, and even took a necklace that Karl bought for his current mistress and showed it to Jackie. Valerie hoped that Jackie and Hannah's efforts would result in Karl breaking up with Beth, allowing Valerie and Karl to be together again. After she saw Beth's necklace, Valerie turned heel and planned to kill her former lover, doing so out of extreme anger. The enraged villainess broke into Karl's hotel room (which he shared with Beth) and stabbed Karl to death, while looking to set up Beth as a scorned woman who killed her lover once she found out he was married. However, after seeing that Beth returned early, the evil Valerie shot and killed Beth. After the murders, Valerie faked her disappearance, placing blood at her home to make it appear that she had been killed.

Upon learning about the murders of Karl and Beth, Jackie feared that Hannah went off the deep end and committed the murders herself, but later in the film, Hannah appeared to Jackie at her home and, while armed with a gun, stated that not only was she not the killer, but she had evidence that Beth wasn't Karl's only mistress. Jackie was shown various photos of Karl with different women, with one of them being Valerie, who (unbeknownst to both women) was outside Jackie's home armed with a gun and wearing a hooded disguise. Valerie's intent was to kill Jackie and (assumingly) Hannah, but she put away her gun and planted the bloody knife in Jackie's dumpster in an effort to frame Jackie for the murders. With the help of Melanie, Jackie figured out that Valerie was the villainess, and she remembered Valerie mentioning a mansion out of town and figured that she was hiding out there.

The film's climax saw Jackie head to the house and call police regarding the fact that Valerie was alive, only for the villainess to appear at the door with a gun pointed at Jackie. Valerie confessed to the affair and to the murders, continuously claiming that she did what she did out of love for Karl. She was set on shooting Jackie, only for Jackie to wrestle the gun away from her. Even with that, Valerie stated that she would set up Jackie as the killer, with the claim that she was hiding from her out of fear, and even accused Karl of stalking her to explain the calls. Jackie called Valerie pathetic for committing such evil actions and claiming that she did them for a man who didn't even love her, and after this, Valerie realized that Jackie was right, and she again wrestled the gun from Jackie. Police arrived and ordered Valerie to drop her gun, only for the villainess to point the gun at herself and commit suicide. 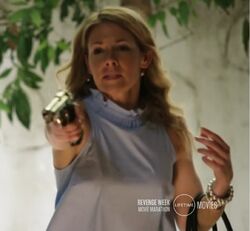 Add a photo to this gallery
Retrieved from "https://femalevillains.fandom.com/wiki/Valerie_Sanders_(Mistress_Hunter)?oldid=204272"
Community content is available under CC-BY-SA unless otherwise noted.