Start a Wiki
watch 00:17
The Loop (TV)
Do you like this video?
Valentina Vostok (Stephanie Corneliussen) was a recurring lead villainess from Season One of Legends of Tomorrow.

Valentina Vostok was a Russian scientist from the former Soviet Union, and in her first appearance in episode 1.04, "White Knights," she was the subject of the Legends' travel to 1986, due to Vandal Savage hiding out in the Soviet Union with plans to create a duplicate of Firestorm. Believing that she's in imminent danger, Ray and Snart were assigned to look after Valentina, with the former originally being tasked to charm Valentina, who ends up being attracted to Snart. Later on, Snart reveals his and the Legends' true mission to Valentina, who later shows her true evil colors when she holds Snart at gunpoint. Her alliance with Savage revealed, Valentina warns Martin Stein to back away from the thermal core or she will kill Snart. Despite Snart's insistence that they continue taking the core's power, Stein acquiesces, and he ends up captured, along with Ray and Mick Rory.

The following episode, "Fail-Safe," has Stein being forced by the evil Valentina to reveal the formula to create Firestorm, with her first tactic including a hallucination of his STAR Labs co-hort, Cisco Ramon. Stein refuses many times, leading to Valentina and Savage having Ray and Mick tortured. After Stein reveals the formula, Valentina notices an incompletion, but later figures out that Stein himself is the final piece--after she notices Jefferson's message to Stein carved on his right arm (with Jefferson using their connection and carving the message). In the episode's climax, the maniacal villainess uses the core and forces a fusion with herself and Stein, giving her the Firestorm powers. Valentina relished her newfound powers before she wreaked havoc and fired shots at nearly everyone in sight, especially Sara and Snart. She was confronted by Jefferson, who bolstered Stein to fight back against Valentina, which he does when he manages to prevent the villainess from firing at Jefferson. Jefferson touches Valentina, separating abd freeing Stein. Without Stein merged anymore, Valentina’s power became unstable. Stein explained was she suffering a nuclear chain reaction, adding a lighthearted “Dr Vostok is having a bit of a meltdown. It’s fascinating”. Valentina was going critical as the team left her there. Their aircraft cleared the blast zone just as she exploded. 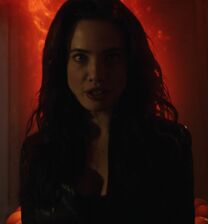 Valentina in front of the thermal core

Reaching for the Firestorm matrix

Full Firestorm
Add a photo to this gallery

Snooty Valentina is approached by Ray

Seems attracted to Snart but actually a ruse 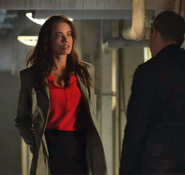 Valentina is surprised by a visit from Snart at her lab

Surprise is on him as Valentina reveals her evil

Plans to steal the Firestorm matrix

Readies the fusion core for transfer

Forcibly merges Stein into her

Burst of new power inside her

Attempts to destroy Jason, but Stein freed by touch

Valentina explodes
Add a photo to this gallery
Retrieved from "https://femalevillains.fandom.com/wiki/Valentina_Vostok_(Legends_of_Tomorrow)?oldid=213159"
Community content is available under CC-BY-SA unless otherwise noted.