Nina Patterson (Bella Thorne) was a minor villainess from Season 1 of MTV's Scream. Additionally, she was a posthumous antagonist for Season 1, providing the conflict for the season's drama half despite her death 8 minutes into the series' pilot episode.

Nina Patterson was the vicious, sociopathic, spoiled, and cruel queen bee of Lakewood, ultimately before her murder. She was the daughter of Tracy and Craig Patterson, along with also being the ex-girlfriend of Tyler O'Neill.

Nina and Tyler, along with classmates Will Belmont and Jake Fitzgerald, ran a lucrative blackmailing operation where they sold risque videos of Nina to town officials in Lakewood before blackmailing them into paying them money lest the public would find out about what they were doing. Nina also bullied Audrey Jensen beginning in the fourth grade, even going as far as to record the closeted Audrey as she made out with her girlfriend Rachel Murray and making the video go viral, humiliating both of them in the process.

As revealed later on in the series, Nina also dared Will to sleep with Emma Duval (the series' main protagonist) out of jealousy of the girl's "goody goody" personality. She also had a previous connection with Emma's soon-to-be boyfriend Kieran Wilcox, having had drinks with him at a bar on the night before her murder.

In the opening of Scream's pilot episode, the peeper mean-girl Nina was eagerly witnessing the attention her video of Audrey was receiving with Tyler, justifying her cruelty by saying that it was "the law of nature." Tyler attempted to persuade Nina into letting him spend the night with her, but Nina refused and admitted that she had only wanted him for his "tech savvy" in order to anonymously post and send out the video.

She went into her lavish house and began undressing to get into the hot tub. Whilst doing this, she received chilling messages and Snapchat-esque videos from an anonymous number, with the messages implying that the sender was nearby and could hear her. Nina was not severely alarmed by the messages, believing them to be from a scorned Tyler. Under that assumption, Nina seductively entered the hot tub wearing a black bikini and continued to toy with the texter — until Tyler's severed head was tossed into the hot tub. Horrified, Nina screamed, grabbed her phone, and scrambled out of the hot tub. She aimlessly ran across her backyard before hiding behind a tree and unsuccessfully trying to call 911 by using Siri (due to being unable to dial her passcode to call 911 with her fingers being wet).

Frightened and terrified, Nina dropped her phone and tried to get into her house, but found all the patio doors were locked. The killer then appeared behind Nina and slashed her back horizontally with a hunting knife. While bleeding in pain, Nina fell and stumbled across the patio but fell onto the grass. She feebly tried to crawl away, but was caught and lifted up by the masked maniac near the edge of the swimming pool. The tear-stained Nina pleaded for her life, only for the masked maniac to respond by swiftly slicing Nina's throat open, letting the villainess choke on her own blood. They then carelessly tossed the limp Nina into the swimming pool, not even bothering to see if she was alive. Nina quickly succumbed to her wounds, and floated face down in the water.

The next morning, Nina's mother Tracy discovered her daughter's corpse when she and her husband Craig returned from a trip.

Nina in her bedroom 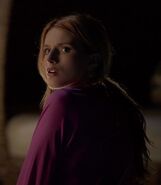 Nina looking around, sensing someone is watching her....

Nina as Tyler's head is thrown into the hot tub

Nina as the killer slashes her back

Nina's corpse floating in the pool
Add a photo to this gallery
Retrieved from "https://femalevillains.fandom.com/wiki/User_blog:Ultimate_Disney_Fan_01/Nina_Patterson_(Scream)?oldid=168565"
Community content is available under CC-BY-SA unless otherwise noted.