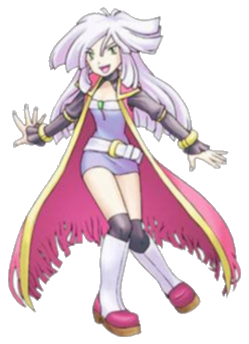 Tiffany is a villain from the video game Pokemon Ranger. She is one of the 4 siblings who controls the villainous team Go-Rock Squad. Her and her brothers are an evil musical quartet that uses their instruments to brainwash Pokemon to do their evil bidding. She plays the violin.

Tiffany is a spoiled and bossy girl that likes to go shopping in Fall City, making her brother or the Go-Rock Squad grunts do her bidding. She is first met in the Krokka Tunnel, looking for the legendary Pokemon Registeel. Once she encounters the ranger, she uses her violin to send an angry Camerupt to attack the player. Once the player beats her, a grunt informs her that another ranger took out the rest of the Go-Rock Squad, forcing her to flee. The next time the player meets her, it's in the Go-Rock Squad's base. This time she sends out 2 Camerupts. Once defeated, she runs away again to her brothers, but not before boasting about how she is a "cute, refreshing, stylish, beautiful, smart, rich, exquisite, stylish [woman]". Your companion points out how she repeated "stylish", irritating her. After beating all 3 of her brothers the collective leaves but not before blowing up the base. After their escape, they now live life as a traveling music group.

In W Mission Story, she and her brothers are trying to steal the Manaphy Egg. She first appears taunting Lunick about how he just got dumped by a girl the night before. She then reveals she was the girl Lunick got dumped by. Next, she explains how her and her brothers manipulated the rangers into helping them locate the whereabouts of an unknown energy by taking over the mind of the legendary Pokemon Deoxys. The energy is later reveled to be the Manaphy Egg. Next, she flees with the Manaphy Egg. Following behind her was Solana who engages her. Tiffany first tries to hide the egg from Solana. Once Solana located the egg, Tiffany resorted to attacking her with a mind controlled Camerupt. Using the help of a Wurmple, Solana tries to free Tiffany's brainwashed Camerupt getting both her and her mind-controlled pokemon covered in a sticky substance as well. Solana gets knocked into the substance by the Camerupt, realizing it was still under her control. Once Solana has fallen over, Tiffany explains how her instrument is three times more powerful than the rangers stylus's. The evil Tiffany, then exclaims that it has the power to even take over the mind of Solana's partner Plusle, creeping her villainous mind-control stylus to the trapped and defenseless Pokemon in an attempt to take over her mind. Before she can complete the brainwashing, she gets distracted by a released Deoxys and Plusle breaks her mind-controling violin. She then flees to her brothers who escape.

Mobilize!! Pokemon Ranger has yet to been translated into English, but according to the context, it follows a similar storyline to the original game. Tiffany battles Lunick with 2 Camerupts and flees to her brothers when she loses.

Tiffany dresses in a lavender tube top, miniskirt with a white belt and a golden buckle. On the upper end of her dress, she has some white fabric with a green gem attached to it. On top of her skirt wears a red velvet cape with gold lining and long, black, frilly sleeves with golden rings on her arms. She wears gold, white, and red go-go boots with black thigh/knee-high socks. She has long white hair and emerald eyes.

Excited to see her brother. 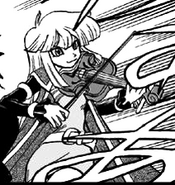 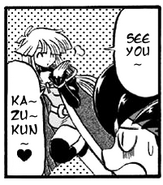 Escaping with the egg.

Trying to hide the stolen egg.

Oh no! Tiffany's plan to hide the egg failed!

Tiffany sends out her hypnotized Camerupt to attack Solana.

Describing her stylus's power to the vulnerable hero.

A powerful device, and some of the evil deeds Tiffany committed.

She is going to control Plusle's mind!

Tiffany's evil plan to control Plusle's mind while it is vulnerable.

No one can stop Tiffany!! 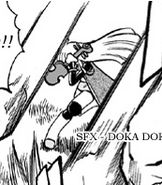 Tiffany, mad that the rangers have the egg.

Running to her brother.

Our villainess tries to kill the Pokemon Ranger by burning him alive. 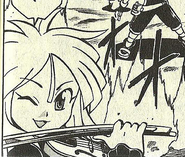 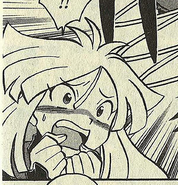 Our villainess is in trouble.

Trying to sneak away. 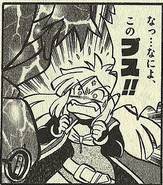 Cutie on the run from the law.

Tiffany's sprite sheet.
Add a photo to this gallery
Retrieved from "https://femalevillains.fandom.com/wiki/User_blog:Tickingtime/Tiffany_(Pokemon_Ranger)?oldid=52078"
Community content is available under CC-BY-SA unless otherwise noted.