Lilith Van Hellscream (Kate Higgins) is a reformed major villain in Monster High. She is a human and a student at New Salem High. Lilith is the niece of the Dutch monster hunter Van Hellscream and attempts to follow in his footsteps. Lilith is a born leader, an intelligent manipulator with a huge ego, and has a propensity for flamboyancy. Her closest friends are two muscular fellow students, who comply with her orders and demands often. She also used peer pressure to influence all the students at her school to hate monsters. Nonetheless, Lilith is not evil. She has a conscience and will listen to it if her actions cause undue consequences to others. She is voiced by Kate Higgins. Lilith is cunning, sneaky, and somewhat snobbish, making her in similar in personality to Cleo de Nile. However, she is also capable of showing genuine concern when trouble brews. When she found out Holt was going to get the Trick-or Treatment, she had a look of surprise on her face and relented, informing the normies at the party that she thought monsters were evil.

Lilith has dirty blonde hair that is pulled back in an apparent low ponytail. She has teal eyes and has a beauty mark near the upper right corner of her lip. Her attire is a resemblance to her uncle's, with a leopard print button-up top, greenish gold leggings, and black, high-heeled boots that rise right above her knees. Lilith also wears a dark brown belt, a red sash that is shown to have bullets in the pockets, and a matching choker. At some points, she wears a monocle over her left eye, also reminiscent of her uncle. She has a whip in a concept art picture, but is never seen using it in the movie. In "Ghouls Rule", Lilith was the ones who ordered to vandalize and vandalized Monster High twice and their own school twice plus one attempt, all five times aided by her goons. The attacks on Monster High were meant to provoke the monsters, while the attacks on their own school were meant to make the monsters look bad. She witnessed Holt Hyde get arrested by the police and attempted to get the others arrested too. Holt eventually escapes as Jackson, and goes to school. Eventually, music plays on the loudspeaker and transforms him back to his monster form. Lilith sees this happen. Frankie and her friends manage to hide Holt (back as Jackson since the music ended) in a janitor's closet, but Lilith gets the police and finds them. She then takes out a radio and turns it on, transforming Jackson into Holt, and the police arrest him, planning to cut his head off with a torture device called the Trick or Treatment. After hearing this, Lilith reforms as she can't stand the thought of a torture device being used on anyone, even a monster. She teams up with Frankie and company and helps save Holt.

Since the events of "Ghouls Rule", Lilith found her monster counterpart in Cleo de Nile, who, like her, struggles to live up to family expectations of leadership, is marginally willing to use others to accomplish her goals, and has a sense for the finest of fashion. The moment they met, they recognized they were kindred spirits despite being the leading figures in their respective groups' growing hostility towards each other. With a bit of pushing by Cleo's friends, Lilith and Cleo managed to use their newfound friendship to establish peace. 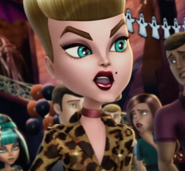 Her heel-face turn, calling out the police for their wrongdoings.

Suspecting Frankie of being a monster

Suspecting Heath and Abbey of being monsters 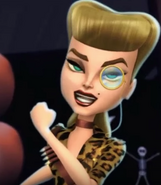 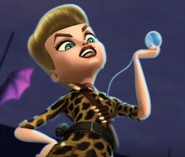 "Look at my monocle, people!" 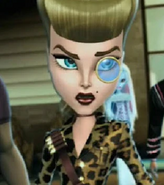 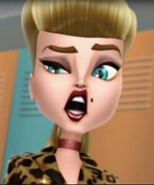 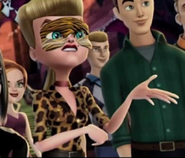 Add a photo to this gallery
Retrieved from "https://femalevillains.fandom.com/wiki/User_blog:Popdropper/Lilith_Van_Hellscream_(Monster_High)?oldid=180230"
Community content is available under CC-BY-SA unless otherwise noted.