Fausta Grables (Lynda Day George) is the titular main villainess from "Fausta, the Nazi Wonder Woman," the third episode of Wonder Woman (airdate April 28, 1976). She was a Nazi officer who was enlisted to lead a mission to capture Wonder Woman, which was known as Operation: Fraulein. Fausta entered America with many agents of the Nazi Party accompanying her, and disguised herself as a cleaning lady. She captured Steve Trevor by using knockout gas and uses him as bait to lure Wonder Woman. Wonder Woman rescues Steve and defeats the Grables' henchman. Fausta watched the superheroine and was impressed at her skills.

Fausta initiates her next plan by disguising herself as Wonder Woman at the bond rally. The audience were confused when there were two Wonder Women. They began a strength test to see who was the real Wonder Woman. Fausta lifts her barbell with ease. When Wonder Woman lifts up her barbell, Fausta's henchmen activated a trapdoor underneath her that makes Wonder Woman fall under the stage.

After successfully capturing Wonder Woman, Fausta and her men took Wonder Woman to their hideout in Berlin. She stripped her of her magic belt and tied her up with the magic lasso. They tried to interrogate her but another Nazi colonel sees this as foolish, throws the belt at Wonder Woman. She frees herself and fights Fausta and quickly beats her as she leaves.

Wonder Woman returns to Berlin only to be caught in a trap made by Fausta and the other Nazi colonel. It was at that moment that Wonder Woman made Fausta realize how little she meant to her Nazi comrades, as her colonel continued to berate her. Having enough, Fausta turned against her Nazi comrades and helped Wonder Woman escaped. Now fully redeemed, Fausta became a double agent for her actions. 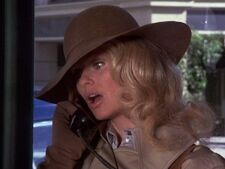 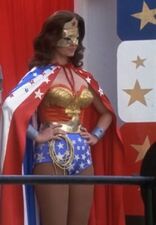 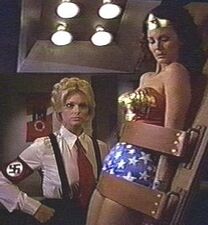 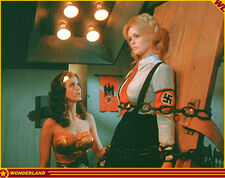 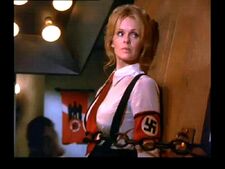 Add a photo to this gallery
Retrieved from "https://femalevillains.fandom.com/wiki/User_blog:Jimbo97/Fausta_Grables_(Wonder_Woman)?oldid=41568"
Community content is available under CC-BY-SA unless otherwise noted.
FandomShop DC Trivia GalaxyQuest