Madame Piranha (Mie Hama) is a character in the 1967 King Kong film King Kong Escapes.  She is also referred to as Madame X in the American version of the film.

Madame Piranha was a representative of an unknown Asian nation attempting to procure the rare Element X in order to produce a nuclear arsenal.

Madame Piranha approached the international criminal Dr. Who (Hideyo Amamoto) and offered him a grant from her government if he could acquire the Element X. Dr. Who brought Madame Piranha to his base in the North Pole, which was built atop a massive underground deposit of Element X. Who showed Madame Piranha his latest invention, Mechani-Kong, a giant robot built in the image of the legendary giant ape known as King Kong. Who sent Mechani-Kong underground to dig up the Element X, but the radiation caused the machine to short-circuit and break down. Madame Piranha informed Dr. Who that her government would be taking their business elsewhere, but Who managed to convince her to give him more time to dig up the material.

Madame Piranha then traveled to New York, where Carl Nelson (Rhodes Reason), Jiro Nomura (Akira Takarada), and Susan Watson (Linda Miller) of the Explorer submarine were reporting the findings of their latest expedition to the United Nations. When Madame Piranha learned that the crew had discovered the real King Kong living on Mondo Island, she quickly contacted Dr. Who and informed him. Who promptly traveled to Mondo Island and captured Kong, then brought him back to his base. Dr. Who told Madame Piranha that his new plan was to hypnotize Kong and force him to dig up the Element X, as unlike his mechanical counterpart he was immune to its radiation.

Madame Piranha watched as the hypnotized Kong began digging up Element X, only to break free of his hypnosis and try to escape. When Dr. Who's henchmen captured and brought Nelson, Nomura and Susan to his base,

Madame Piranha arranged a private meeting with Nelson, attempting to seduce him. Nelson was instantly suspicious of Piranha, and struggled to determine what country she represented. Just then, Dr. Who interrupted their meeting and had Nelson taken away. Later, when King Kong escaped from Dr. Who's base, Madame Piranha caught Nelson and his crew before they could escape as well, and brought them onto Dr. Who's ship.

When Madame Piranha learned that Dr. Who intended to release Mechani-Kong in Tokyo to either capture or kill Kong, she protested on the basis that thousands of innocent people would be killed. Dr. Who questioned why Madame Piranha had suddenly developed a conscience, then left to prepare Mechani-Kong. Realizing that Dr. Who was pure evil, Madam Piranha helped Nelson and his crew escape the ship so that they could draw Kong away from Tokyo. Although Nelson insisted she accompany them, Madame Piranha stayed behind to try and stop Dr. Who.

Madame Piranha cornered Dr. Who and held him at gunpoint, but he physically overpowered her and shot her in the arm. Who then unleashed Mechani-Kong in Tokyo, where the machine kidnapped Susan and climbed to the top of the Tokyo Tower, with Kong in pursuit. After Kong had gotten Susan to safety, Madame Piranha destroyed Mechani-Kong's controls aboard the ship, causing Mechani-Kong to fall from the top of the Tokyo Tower and plummet onto the streets below, destroying it. However, Dr. Who immediately gunned Madame Piranha down in retaliation. Madame Piranha's sacrifice would not be in vain though, as Kong attacked and destroyed Dr. Who's ship the following morning, ending the mad scientist's reign of terror once and for all. 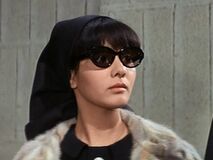 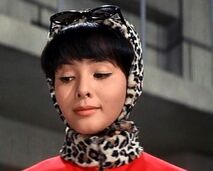 Add a photo to this gallery
Retrieved from "https://femalevillains.fandom.com/wiki/User_blog:Jadegodzilla/Madame_Piranha_(King_Kong_Escapes)?oldid=186899"
Community content is available under CC-BY-SA unless otherwise noted.