Spinel (Sarah Stiles) is the main antagonist of the 2019 Cartoon Network animated television film Steven Universe: The Movie. She is Pink Diamond's former best friend of the Homeworld Gems, who was abandoned by Pink in order to turn Earth into a colony for Homeworld. After realizing Pink was not going to come back to her and after hearing about Steven Universe, she decided a plan to destroy Earth, all organic life and everything Steven loved.

Spinel's appearance is seemingly based off an old-fashioned cartoon. When Spinel became evil, she has a dark pink complexion, magenta eyes, a small pointy nose, and magenta hair that is styled into a pair of pigtails that are messy. She has three black lines underneath both of her eyes, reminiscent of running mascara. Her clothing consists of a dark magenta top, pointy dark hot pink sleeves, dark magenta shorts, dark hot pink wrist-length gloves, white stockings and a pair of magenta knee-high boots that are pointy at the top. her eyelashes are hidden underneath her bangs. Overall, her appearance is similar to that of an old-fashioned cartoon.

Her gemstone is located in the center of her chest, cut in the shape of a heart. When she became evil, her heart-shaped gemstone turned upside-down. Before she became evil, she had puffy hot pink sleeves, and her pigtails were shaped like hearts. In addition to her former appearance, she had a vibrant pink complexation. Her eyelashes were more visible. Her boots were not pointy at that time (the time of before she became evil).

Originally, Spinel had a goofy, fun-loving and a rather innocent personality, being Pink Diamond's best friend to the point of being clingy. She greatly enjoyed her time with Pink Diamond and viewed her as her best and only friend. This friendship turned into practically undying loyalty, as she did not hesitate to wait 6,000 years for Pink Diamond when she was told by her it was part of a game.

However, upon seeing Steven's message, she realized that Pink had completely forgotten about her and started a new life with family and friends and left Spinel alone, not even bothering to send her back to Homeworld or formally tell her that Pink didn't want to bring Spinel with her. Upon realizing this, Spinel was heartbroken and brought to tears, utterly devastated with this information.

It was because of this event that she became filled with unyielding rage and hatred. Out of spite and anger towards Steven and the other Crystal Gems for their close relationships with Pink Diamond, she decided to get a drill with poisonous bile that would destroy all organic life on Earth. While fueled by rage, she still retained her humor and jovial nature, even while fighting the Crystal Gems. She took sadistic joy in knowing that Earth would be destroyed and stated that after knowing Steven, she wanted to kill him even more.

Despite her more evil nature, she still longed for a friend, and upon seeing that Steven was willing to be there for her, she decided to stop her plan at destroying the Earth and became momentarily redeemed. Upon being reformed, she appeared rather nervous around the other gems and constantly hid behind Steven.

After having her innocence broken and her faith in Pink Diamond shattered, she became much more paranoid and on-guard, which was why upon hearing Steven saying that once Garnet's memories and his powers were restored, they could live "happily ever after", she viewed the remark as meaning she'd be excluded and left alone once again. Then, when she saw Steven had her scythe in his pocket, Spinel immediately viewed it as proof that once she did what Steven wanted of her, he would get rid of her when her back was turned. This caused her to once again return to her former evil self and resume her destruction of all organic life on Earth.

As she continued fighting with Steven, she became overwhelmingly enraged by Steven attempting to reason with her and convincing her she could change, believing that he didn't understand how she felt and that he couldn't change how she felt. She began acting purely on rage, pummeling Steven with endless punches and attacks; while doing this, she openly admitted that she had changed for the worse, going so far as to say before, she wasn't good enough for Pink Diamond, but now, she wasn't good enough at all.

After seeing how far she'd fallen, how violent she'd become, how much she wanted to hurt Steven, and how Steven had actually liked her, Spinel began to crumble under her pain and sadness, realizing how far she had fallen and how monstrous she had become, remembering that all she wanted was to be a friend. Once she came to accept her sins and Steven's friendship, Spinel became fully redeemed, now dedicated to making new friends and starting from scratch.

Previously belonging to Pink Diamond, Spinel was abandoned by her for thousands of years, left waiting alone in the garden. After 6,000 years of standing still, Spinel finally had gotten news on what has become of her Diamond. She learns that Pink Diamond no longer exists and had given up her physical form to give birth to her son, Steven. After learning this and also realizing the fact that her Diamond abandoned her, she changed her appearance and swore vengeance on Steven and Pink's "new friends".

Later on that same day, Spinel arrived on Earth on a massive injector, that she then injected into the ground. As the injector began filling the ground with poison, Spinel began to fight against the Crystal Gems and poofed Garnet, Amethyst, and Pearl in the process with her Gem Rejuvenator. Furious, Steven manages to grab hold of her weapon and poofs Spinel with it as well.

After the battle, Steven brings the poofed gems (including Spinel) to the temple where he learns, after the Crystal Gems had reformed, that they have lost their memory. Not too long after this revelation, Spinel reforms too and acts oddly friendly and playful towards Steven, calling him her new best friend.

Throughout the movie, Spinel would follow Steven everywhere he went and would "help" him get his friends' memories back. While doing so, she would also try to play with him, but never got to chance to, due to him being too focused on helping his friends. After helping Amethyst, Steven and the other remaining Crystal Gems learned that the only one who can stop Spinel's injector is Spinel herself, but in order to do that they need her to remember who she is and since Pearl is the only one who seems to know her, the group decides to help her next. That evening, Spinel would join Steven and the other Crystal Gems at the Abandoned Warehouse, where they would try to get Pearl to regain her memories by listening to a song written by Sadie Killer and the Suspects ("Disobedient"). When that didn't work, Steven figured out that the only way Pearl would be able to think for herself, as well as regain her memories, is if her owner "disappeared", just like Rose did. In order to do just that, Steven fuses with Greg (who Pearl thought was her owner) and forms a new fusion named, Steg. Steg then sings a song ("Independent Together") that helps Pearl remember who she is and later duets with him (as Opal).

Although the song had succeeded in helping Pearl, it caused Spinel to see that Steven cares more for his friends than her. Upset, she flees to Pink Diamond's Garden, where she tells Steven the story of her past as well as her abandonment, causing her to return to her former self. Steven, feeling bad for Spinel, befriends her and brings her back to the Gems and Connie, who, after initially being wary, agree to let Spinel help Steven in deactivating the Injector.

Upon deactivating it, Spinel is once again hurt by Steven's reaction. She then claims that he only needed her for the Injector, and did not want to be her friend. Thinking he will betray her as his mother did, she resorts back to her old behavior and attacks Steven, this, however, causes Garnet to regain her memories as well. Spinel then retreats to the top of the Injector and is soon followed by Steven, who then tries to talk to her. This further infuriates her, causing them to fight, until it becomes apparent she has lost her motivation to destroy him and regrets her actions up until that point. Steven, now fully reunited with his powers, comforts her and claims she can start fresh with new people to be her friends. The Injector then explodes due to the battle, and Steven saves Spinel by entrapping her in his bubble alongside him. Steven then attempts to comfort her again, as Spinel decides she has created too much damage and must leave.

The Diamonds then arrive ready to confront Steven about where they will live and Steven introduces Spinel to them, thus giving her the new friends he promised. Spinel then says goodbye to Steven and leaves Earth with alongside the Diamonds.

She presumably has all the powers of a normal Gem. 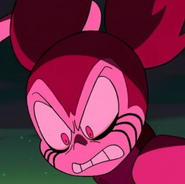 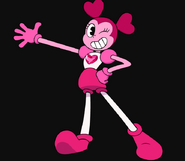 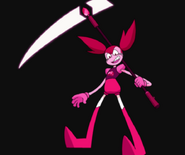 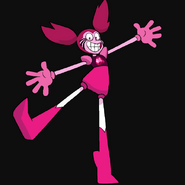