Fester with little hope of finding a woman looks up the 'great hopes dating service' catalogue. Finding a potential named Lucrecia he sends a video of himself only to receive no reply back after 2 weeks of checking the mail box.

To some confusion Melinda later arrives outside the residence looking for the address of a baby shower she'sbeen invited to. Within seconds of being introduced into the episode she is taken out by a mini rocket that Fester had fired from the house. After all the smoke clears up she is sat up in a fried state,hair and makeup ruined with her shoe half on. She sees Wednesday Addams at the gate and faints completely.

Melinda later gets back to her feet and comes inside with all the Addams Family members mistaking her for Lucrecia. After threatening to kick down the door the family allow her to come in. The threats continue as she makes her intentions clear that the Addams family wont get away for firing a rocket. Wednesday fixes the situation by shootting her in the leg with a love potion dart that completely changes her tone towards Fester and they head down to the basment together for some alone time.

After kissing isnt enough Fester chains her against the wall at her own will, as he goes in for the big move the love potion wears off and Melindas face changes from being ready to make love straight to completely horrified. She unchains herself to see a mirror reflection of her rocket fried state and runs out the Addams family house screaming in humiliation. This is the last she's ever seen. 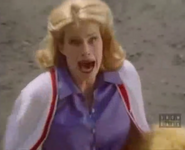 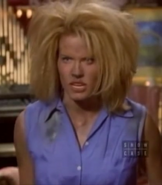 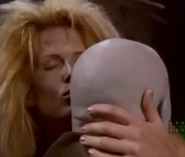 Add a photo to this gallery
Retrieved from "https://femalevillains.fandom.com/wiki/User_blog:Hadouken88/Melinda_Carver_(The_New_Addams_Family)?oldid=134328"
Community content is available under CC-BY-SA unless otherwise noted.